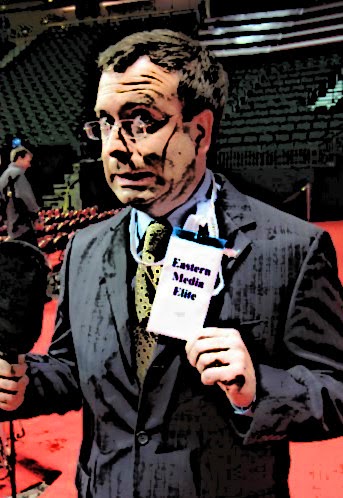 The Washington Post’s Dana Milbank wrote a column on Monday titled “Heritage’s ugly Benghazi panel,” portraying a forum held the same day at the Heritage Foundation, hosted by the newly formed Benghazi Accountability Coalition, as nothing more than an anti-Islamic hate-fest. This was a serious panel with numerous, widely recognized experts, a couple of whom were also members of Accuracy in Media’s Citizens’ Commission on Benghazi. CCB’s April report, “How America Switched Sides in the War on Terror,” made international headlines.

That report took some serious skin. Diane Sawyer, Bob Woodward, and other stalwarts of the mainstream media, have taken Hillary Clinton to task over Benghazi. With Heritage and others now picking up the baton, something clearly needed to be done. They can’t have Hillary’s chances in 2016 threatened by that Benghazi “old news.” As Hillary herself said, “What difference, at this point, does it make!?”

Enter Dana Milbank, WaPo’s hit “journalist,” who sees Joseph McCarthy, and racist bigots behind every conservative door. He could not, and did not, dispute the facts raised during this afternoon-long forum. Instead he used a now-standard device of the left when confronted with uncomfortable truths. The discussion and topic was discredited by simply describing what was said in a presumptuous and mocking tone. It is a clever way to discredit facts in the reader’s mind without actually disputing the facts. So for example, he wrote:

“The session, as usual, quickly moved beyond the specifics of the assaults that left four Americans dead to accusations about the Muslim Brotherhood infiltrating the Obama administration, President Obama funding jihadists in their quest to destroy the United States, Obama and Hillary Rodham Clinton attempting to impose Shariah blasphemy laws on Americans and Al Jazeera America being an organ of ‘enemy propaganda.’”

Most of the above, of course, is true. President Obama did fund the Libyan opposition, which was known to have al Qaeda ties, and those same jihadists turned around and attacked the Benghazi Special Mission Compound, killing Americans. He blatantly supported the Muslim Brotherhood in the misnamed Egyptian “Arab Spring” where one of America’s most reliable Muslim allies, Hosni Mubarak, was deposed.

Obama and Clinton are certainly doing nothing to stop the spread of Shariah in America, and the Muslim Brotherhood has infiltrated the Obama administration. Another report out Monday quoted Mohamed Elibiary, an advisor to the Homeland Security Department and Muslim Brotherhood supporter, writing in a tweet, “As I’ve said b4, inevitable that ‘Caliphate’ returns…” Finally, anyone even remotely familiar with Al Jazeera knows it is an Islamist propaganda organ. The fact that it occasionally does a better job of reporting news than the American mainstream media is simply a reflection of just how bad the American media have become.

But apparently Milbank’s job is not to delve into the facts. Instead, his job is to discredit Obama’s detractors. So he used another standard leftist device as well. He found a convenient straight man to play the victim, innocently asking questions and making statements designed to provoke a predictable response, which could then be attacked with the usual leftist rhetoric. In this case, he utilized a Muslim woman named Saba Ahmed. He wrote, “Saba Ahmed, an American University law student, stood in the back of the room and asked a question in a soft voice…” He quoted her as saying:

“We portray Islam and all Muslims as bad, but there’s 1.8 billion followers of Islam… We have 8 million-plus Muslim Americans in this country and I don’t see them represented here.”

So, of course, the fact that the forum was not packed with Muslims implies it had to be biased. Substitute “white privilege,” “racism,” “McCarthyism,” or any of the other familiar leftist shibboleths. If you can’t discredit the message, smear the messengers. Ahmed also performed another, perhaps more important service, she changed the subject away from the disaster that was Benghazi and forced the panel to make it all about her bogus concerns.

As described by Milbank, one of the participants, Brigitte Gabriel, immediately “pounced” on Ahmed. Gabriel, who grew up in Lebanon during the civil war and saw first hand what the Islamists did there, founded Act for America to educate Americans on the threat from radical Islam.

Except that Gabriel didn’t pounce. She didn’t even respond. A partial video of the forum, posted at Media Matters of all places, and reposted at Mediaite.com revealed that instead, Center for Security Policy President Frank Gaffney gave a very measured, careful and respectful response. Then Gabriel “pounced.” But even then she didn’t pounce at all. Finally, Milbank selectively edited Ahmed’s question as well. He mischaracterized the entire exchange, which was very respectful. Here is the video.

Milbank described Gabriel’s response to Ahmed as though it was the height of absurdity. He selectively reported her response that “180 million to 300 million” Muslims are “dedicated to the destruction of Western civilization,” that the “peaceful majority were irrelevant in the attacks of Sept. 11, 2001… Most Germans were peaceful, yet the Nazis drove the agenda and as a result, 60 million died.”

This is all true as well. The peaceful Muslims—and there are no doubt many—are just as passive and impotent as everyday Germans were while the Nazis were killing Jews during WW II, but Milbank made it sound as though she had committed a crime: “she drew a Hitler comparison,” he gasped. What is wrong with that? It is a good analogy. He didn’t mention all the other analogies she drew, including mass murder committed by Japanese and Soviet communists, where the people were similarly powerless.

But we must ask a larger question. What was Saba Ahmed, the innocent, soft-spoken American University “student,” doing there? It turns out Ahmed is more than just a “student.” She has a lobbying firm in Washington, DC. She once ran for Congress while living in Oregon, where she went missing for three days over a failed relationship, according to family members.

She came to the aid of a family friend, the Christmas tree bomber, who attempted to set off a vanload of explosives in a downtown Portland park where Christmas revelers were celebrating. The bomb was actually a dummy, part of an FBI sting investigation.

After losing the Democratic primary, she even switched sides, becoming a registered Republican. But she never switched loyalties. She spoke against the war in Iraq at an Occupy rally in Oregon, has worked on the staff of Democratic Senator Patrick Leahy (VT) and has been a Democratic activist for a long time—not exactly the innocent “student” portrayed by Milbank. A 2011 article describing her odd Congressional campaign stated:

Ahmed, who says she’s been recently lobbying Congress to end U.S. military involvement in Afghanistan, said that ‘Obviously I am not a traditional politician.’ 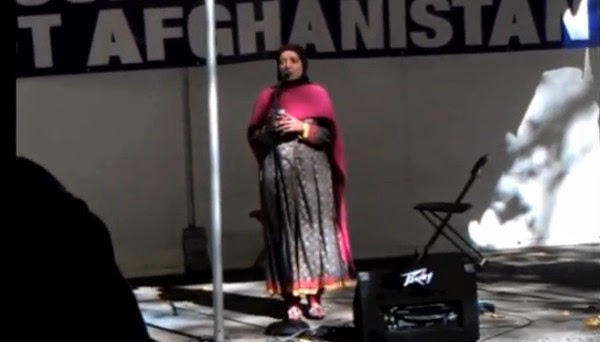 Obviously… Gabriel saw right through her act and confronted her. “Are you an American?” she asked, and told her that her “political correctness” belongs “in the garbage.”

Milbank characterized it all as a pile-on against this one meek, lone voice of reason. He went on to further ridicule the forum and its participants, observing among other things:

(Many claim he was raped and tortured. An autopsy report would settle the issue, but of course the Obama administration won’t release it.)

“Gabriel floated the notion that Stevens had been working on a weapons-swap program between Libya and Syria just before he was killed.”

(That was apparently the real reason behind the entire fiasco.)

“Panelist Clare Lopez of the Citizens’ Commission on Benghazi said the perpetrators of the attack are ‘sipping frappes with journalists in juice bars.’”

This last comment was particularly outrageous. Milbank makes Lopez’s statement sound absurd, worthy of ridicule, but in fact CNN located the suspected ringleader of the terrorists involved in the Benghazi attack and interviewed him for two hours at a prominent hotel coffee bar in Benghazi. FBI Director James Comey was grilled in a Congressional hearing about it. Congressmen Jason Chaffetz (R-UT) demanded to know how CNN could locate the terrorists so easily while the FBI couldn’t. Just today it was reported that that same suspected ringleader of the attack on the compound in Benghazi, Ahmed Abu Khatallah, was captured in Libya and is being brought to the U.S. on a ship.

Lopez is a former career CIA case officer and expert on the Middle East. Yet here is Milbank trying to make her look like some kind of yahoo. But one doesn’t have to dig too deep to discover who the real yahoo is.

Milbank’s trump card was Ahmed. It was almost certainly a setup. Milbank found an activist he knew could play her part well. She feigned a humble, meek, ignorant college student who made a single observation and became the “victim,” whose harsh treatment Milbank could then excoriate, while discrediting a panel of distinguished experts that included Gabriel, Lopez, Andrew McCarthy—who prosecuted the case against the Blind Sheikh, the World Trade Center bombing mastermind—and many others.

I think @Heritage needs to weigh in on this @Milbank column and release the video, yes? http://t.co/JcQj4hDD3N

Wow. Now that we have video http://t.co/q5vSyHmpYl I feel like @Milbank totally misrepresented the panel: http://t.co/uOc4NTCJXi

Meanwhile, the pink elephant in the room was the massive intelligence, military, foreign policy and leadership failure that Benghazi represents for the Obama administration, and by extension, the absolutely inexcusable incompetence—or worse—of Hillary Clinton’s State Department.

Like most of the Democrats’ media shills, Dana Milbank lies quite well, but they are lies nonetheless. We are well advised to recognize them as such. Hillary Clinton should not be allowed anywhere near the White House. She, along with Obama and many other Democrats, should instead find themselves under the microscope in a serious criminal investigation. I won’t hold my breath, however.