Geopolitics: From Syria to Iraq to Afghanistan to Pakistan, the jihadist dream of a caliphate stretching from the Atlantic to the Himalayas is taking shape. It's aided by a feckless foreign policy not seen since Neville Chamberlain. 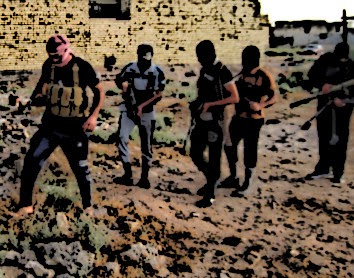 As President Obama learns about it in the newspapers, the Islamic State of Iraq and Greater Syria (ISIS) is dismembering Iraq, adding Saddam Hussein's birthplace of Tikrit to the list of cities once liberated by the U.S. that are now flying jihadist flags. The war on terrorism is over all right, and Obama lost it.

An American official has told The Blaze that the U.S. Embassy, United Nations and other foreign organizations with a presence in Iraq are "preparing contingency plans to evacuate employees." We might soon see helicopters on the roof of our embassy in Baghdad in a scene reminiscent of the last days of Saigon as Iraq becomes Obama's Vietnam.

Unlike Vietnam, ISIS is not interested in liberating the homeland from colonial oppressors. ISIS and other radical Islamists have long proclaimed a goal of restoring a pan-Islamic state, a caliphate that extends from the Mediterranean coast to the Iranian border. One such Islamic empire, in the seventh century, spanned the Middle East, spread to Southwest Asia, North Africa and Spain, ending with the Mongol sack of Baghdad in 1258.

The largest and most powerful rebel force in Syria is Jabhat al-Nusra, with 7,000 fighters. It's a branch of al-Qaida in Iraq, from which it has received regular payments.

"It's now time to declare in front of the people of the Levant and (the) world that the al-Nusra Front is but an extension of the Islamic State in Iraq and part of it," Iraqi al-Qaida leader Abu Bakr al-Baghdadi is quoted as saying recently in a piece on AlArabiya.net.

"This (ISIS' rise in Iraq) is of great significance," according to an assessment released Wednesday by the Soufan Group, a private security company. A restored caliphate will attract "many more disaffected young people ... from all over the Muslim world, especially the Middle East, lured by nostalgia for al-Khulafa al-Islamiya (the Islamic caliphate), which remains a potent motivator for Sunni extremists."

Restoring the caliphate was the stated goal of Osama bin Laden in creating al-Qaida, but the terrorist group was never designed to take and hold territory as is ISIS, now flush with captured cash and weaponry.

"It's ISIS that will build the caliphate, not al-Qaida," says Aymenn Jawad Al-Tamimi, who monitors jihadist activity for the Middle East Forum.

The president's endless apologies to the Muslim world, starting with his Cairo speech in 2009; his abandonment of the U.S. diplomatic mission in Benghazi while blaming the terrorist attack on a video; his precipitous withdrawal from Afghanistan as Iraq implodes; and his trading of Taliban commanders for an alleged deserter have sent powerful signals of weakness. Obama's actions are reminiscent of how President Clinton's withdrawal from Somalia inspired bin Laden.

Former Secretary of Defense Donald Rumsfeld warned in a speech in 2005 that, without U.S intervention, "Iraq would serve as the base of a new Islamic caliphate to extend throughout the Middle East, and which would threaten legitimate governments in Europe, Africa and Asia."

The White House's failure — or was it a refusal? — to sign a status-of-forces agreement to retain a presence in Iraq — a deal which Obama now claims is necessary in Afghanistan — created a vacuum that ISIS is quite willing to fill.

As the Taliban bides its time in Afghanistan, its leadership replenished by Obama, it has the strength to attack the airport in Karachi, Pakistan, in a country that has nuclear weapons. Obama has made possible the specter of not only an Islamic caliphate, but also a nuclear one.

This is not fecklessness, it is perfidy, treachery, treason.

Perfidy, treachery and treason is the going price that voters are willing to pay for free stuff from our fascist government.