After Releasing Terrorists and Arming Them With Stinger Missiles, Obama Rails Against Guns to Promote a "Safer Society"

My memory may not be the best, but didn't the biggest mass-murder in history occur on 9/11/2001 when 3,000 people perished at the hands of Islamofascists?

Coming then as it does on the heels of the release of five of the most vicious, bloodthirsty terrorist generals in history, Obama's latest anti-Constitutional screed strikes me as unintentionally idiotic. 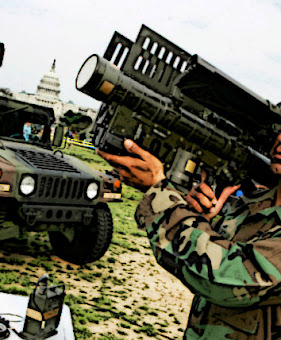 Gee, doesn't the U.S. have a Second Amendment which protects the government from encroaching on the citizens' right to keep and bear arms? And isn't Australia missing such a citizen protection clause in their highest law?

“Australia had a mass shooting [in 1996] similar to Columbine and Newtown, and just said, ‘That’s it, we’re not seeing that again,’ and basically imposed very severe tough gun laws and they haven’t had a mass shooting since,” Obama said, after he was asked for his reaction to recent shooting episodes in California and Oregon. Those laws included the confiscation of nearly all handguns and rifles.

You mean gun control like that enacted by Chicago and Washington, DC which have both banned handguns for decades?

But the country needs “commonsense rules in place that make a dent in what’s happening,” he said, after an emotional appeal to the students and young people who were watching the Tumblr broadcast, which was advertised as a question-and-answer session about student debt... “My greatest frustration so far is that this society has not been willing to take some basic steps to keep guns out of the hands of people you know who can do just unbelievable damage,” he said.

You mean like keeping firearms away from the mentally ill, as the NRA has repeatedly suggested? Basic steps like that, which might require committing the truly insane as we did before the ACLU and the rest of the left wing radicals got their hands on the mental health system?

...that the same president who armed the Taliban with Stinger missiles and the Mexican drug cartels with military-style weapons -- including hand grenades -- is hectoring the American public to forego their Constitutional rights while allowing terrorists, the disease-ridden, and gangsters to wander into the U.S. through our open southern border?

Throughout history, which are more dangerous to the population at large? An armed citizenry... or an all-powerful central government that has disarmed its citizens?

Let's see: Mao killed 80 million; Hitler was responsible for 50 or 60 million; and Stalin tallied perhaps another 40 million more. The point is not that they are progressive icons -- all socialists -- but that an armed citizenry is the ultimate defense against a rogue government.

Which is especially timely given what's happening on our southern border as well as what has occurred throughout the Obama presidency.

One of the reasons folks go postal is the perceived breakdown of societal norms: employment, values, social structure, support systems, hope, stability, etc. They are frustrations with crisis Obama himself is creating through his psychopathic love of Cloward Piven. In fact, has Barry not said he's really good at killing people? Has he not released terrorists into the general population? Is he not funding jihad and supporting the religion of death at every turn? Has he not betrayed our friends at every turn? Has he not bankrupted our Country?
If he wants to do some good I'd suggest he stop acting like the "catch me if you can" killer and check in to Kenya for rehab.

I don't always agree with Denninger, but he is right on in his analysis of the black box warnings and mathematical certainty of male children and young adults going psycho on SSRI antidepressants. You take the percentage of negative outcomes the drug companies themselves are forced to admit multiplied by the number of scrips to the sensitive demographic and you wonder why there haven't actually been more mass murders. Denninger calls them "rage monsters" and that works for me. The Gov and Big media won't say a peep because it is the same companies spreading around that sweet sweet Viagra/ Levitra/Cialis money. Campaign contributions and program (esp. news) sponsorship ensures complicit silence.

Progressives need to STFU about attempts of gun control. If they try they will have lots more problems on their hands.