THE PLUNDERERS AND THE PEOPLE

My new banjo arrived in the afternoon (on Railway Express - this was pre-Woodstock, remember), and late that evening, the news came in that Barry Goldwater had won the California primary, defeating New York Gov. Nelson Rockefeller by two percentage points.

I'm still playing that banjo, and that election is still changing history.

On June 10, another earthquake hit, this time shaking the Seventh Congressional District of Virginia to its core. 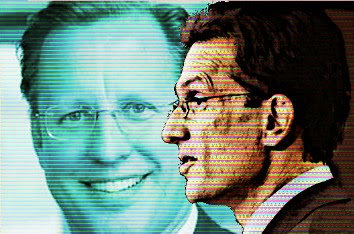 And it's going to make history too.

Last week, Republican Majority Leader Eric Cantor, who had been tipped as the natural successor to House Speaker John Boehner, was soundly defeated by Dave Brat, an economics professor, for the Republican nomination.

I remember when Democrat Majority Whip John Brademas - my Congressman - lost his longtime seat to a Republican businessman who, like Brat, was a political novice in 1980.

It was a pretty big deal, but Brademas' loss was drowned out by the the Reagan victory, a political earthquake that would never have happened without that California primary 16 years before.

Like Cantor, Brademas was accustomed to being reelected almost automatically - until he wasn't.

If past is prologue, the defeat of Cantor by a political unknown does not augur well for the Republican Establishment - or for the Democrats: it's hard to tell, on any given day, which of them hates conservative upstarts like Brat the most.

It is clear that the GOP Hot Tub crowd will fight fiercely to maintain its control of the party. Yes, they owe their majority to the Tea Party, but they'd rather rule in the minority than be backbenchers in a conservative majority.

After all, they'd still get their share of the swag, and the Plunder Pie just keeps growing.

For his part, Cantor has made no secret of his contempt for the Tea Party. After all, he has no incentive to accommodate them.

In fact, the harder he fights them, the more money he will make as part of the K Street lobbying machine. The starting bid for his services from the Beltway Bandits will undoubtedly be in the mid-seven figures.

Speaking of money, Cantor outspent Brat by a factor of some forty to one. In fact, the New York Times reports that Cantor spent more money on steakhouses than Brat spent on his entire campaign.

Cantor's big money came from the Crony Capitalist machine - especially the US Chamber of Commerce, whose members desperately want amnesty for illegal aliens so their members can continue to enjoy a surfeit of cheap labor in these hard economic times.

But Brat didn't win on the issue of amnesty alone. Obama's frivolous disregard of the law regarding illegals was emblematic of his overall disregard - his outright contempt - for the Constitution and the rule of law.

Conservatives have tired of their party leaders who have gotten comfortable splashing around in the Hot Tub to keep their own private party going.

And it's quite a party. It's no secret anymore that Big Government has made the Washington region by far the richest in the country. Real estate agents are stunned when selling prices for average homes are bid up by ten or twenty percent within days of being listed by eager buyers moving to town to cash in on the plunder.

The bipartisan members of the Crony Crowd must be shaking for the drinks right now. Their entire operation, lubricated by billions of taxpayer dollars, is in real danger of drying up.

It's not only in Virginia that this earthquake is being felt. The ground is also shuddering in Mississippi, where Sen. Thad Cochran, a big-spending appropriator who has been spreading the money around forever, will have to defend his seat in a Republican primary runoff against another Tea Party favorite, State Senator Chris McDaniel.

Cochran calls McDaniel an "extremist," but the Washington Examiner's Tim Carney has a better read on the situation. Cochran is a king of pork, according to Carney, and, in the last three years during which earmarks were permitted by the Republican caucus, Cochrane advocated a cool billion dollars' worth, all by himself.

Carney reveals a "tweet" from a "revolving-door K Streeter" who speaks from the Crony perspective: "I guess Mississippi doesn't want Federal money anymore. I betcha there are 49 states that will gladly take it."

After Cochran and Co. first "take it" from the taxpayer, of course.

These are the guys that Pope Francis is talking about when he condemns rampant greed in the West. It has nothing to do with capitalism, and everything to do with the Mafia-style thuggery and corruption that prevails in both his home country of Argentina and his new home in Italy, where the same kind of crony favoritism prevailed under Mussolini's Fascism as well.

Cantor's defeat is "bad news for big business," says the Washington Post. Well, it's bad for the Post too, and for the Wall Street Journal, where Cantor's "stunning defeatŠ shatters in one dramatic stroke" the GOP Establishment's dreams of being in power forever.

It's seldom that the Plunderers are so soundly defeated by the People. But the GOP had better get used to it - or get out their tape measures and start checking out the Minority offices on Capitol Hill.

Best analysis of the political situation I've read so far. This has the factors in play, not just the names.

Mississipi is #1 in Fortune's list of most corrupt states in the U.S. Ohio is in there, too. But Massachusetts isn't. Surprising. Those "lists" never tell what parameters they use.

J. Christian Adams had some details on the corrupt things done in Mizipi voting by the DoJ in the name of equality. Utterly creepy.

As for Cantor, does he care? I mean in the final analysis? He'll still be up to his neck in the Hot Tub inside the bubble, won't he? Isn't that what matters?