MADISON, Wis. — Smacked by two judges in their legal effort to take down Gov. Scott Walker, prosecutors in Wisconsin’s secret John Doe investigation have taken their case to the friendlier court of mainstream media.

Citing 268 pages of documents released Thursday, the Associated Press and the Milwaukee Journal Sentinel laid out the prosecution’s argument that conservative organizations and others illegally coordinated political activities with Gov. Scott Walker. 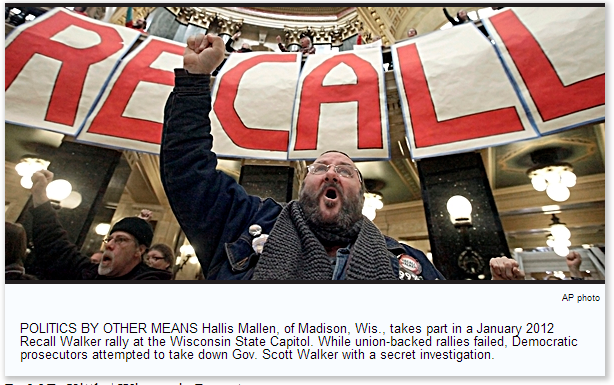 Looking at the same documents, two judges have already ruled that John Doe prosecutors have absolutely no evidence of wrongdoing.

U.S. District Court Judge Rudolph Randa, who last month shut down the investigation through a preliminary injunction, described the prosecutors’ claims against Walker as “simply wrong.”

“The prosecutors’ coordination conspiracy is the conspiracy to do things that are not only legal, but are absolutely protected by the U.S. Constitution,” said a legal expert with knowledge of the lawsuits. The source asked not to be identified due to his proximity to the case.

The documents, selected by prosecutors for the 7th Circuit U.S. Court of Appeals, provide the public’s first real look at the well-organized liberal effort to unseat Walker.

In October, Chisholm and other prosecutors carried out at least five predawn raids of the homes and offices of conservative and free-market activists, law-enforcement officials confiscated equipment, phone records and other communications, some of which is referred to in Thursday’s document release.

“The materials released today are all ones that we asked the district court to unseal because the public has a right to know about the John Doe prosecutors’ abuse of government power,” said Andrew Grossman, an attorney representing conservative activist Eric O’Keefe and his Wisconsin Club for Growth in a lawsuit against John Doe prosecutors.

“These documents show how the John Doe prosecutors adopted a blatantly unconstitutional interpretation of Wisconsin law that they used to launch a secret criminal investigation targeting conservatives throughout Wisconsin,” he added.

That claim is at the heart of O’Keefe’s federal civil rights lawsuit.

Like all targets of John Doe investigations, O’Keefe was bound by state law to say nothing publicly of the investigation. That provision of the John Doe law, ostensibly designed to protect innocent witnesses from any implication of criminal wrongdoing in connection with the probe, increasingly has been used to allow government prosecutors to conduct opposition political research at taxpayer expense.

But O’Keefe went public. In a high-profile Wall Street Journal piece and in Wisconsin Reporter articles, O’Keefe surprised prosecutors by announcing he had turned the legal tables — suing them for violating his constitutional rights.

O’Keefe and the Wisconsin Club for Growth claim the prosecutors — including Chisholm, the Democrat who launched the John Doe probe in late summer 2012; two of his assistant DAs; John Doe special prosecutor Francis Schmitz; and a shadowy contracted investigator — violated their rights of political speech and association through a bogus, partisan “witch hunt” of an investigation.

The investigation included what sources have described as “paramilitary-style” predawn raids on the homes and offices of conservative targets.

Randa’s preliminary injunction remains in effect, although the 7th Circuit is now taking up the prosecutors’ appeal.

“Sunlight is the best disinfectant, and this is a story that needs to be told to prevent more abuses and to hold the John Doe prosecutors accountable for violating the rights of Wisconsinites,” Grossman said.

The fascist movement marches on.