NOT A SMIDGEN OF A SCANDAL: Benghazi Pilot Says Stevens, Smith, Doherty and Woods Could Have Been Saved

Scandal: The pilot who flew the survivors of the Benghazi tragedy to Germany says we could have rescued those who died and that the State Department knew who was attacking as it listened to the terrorists on captured cellphones. 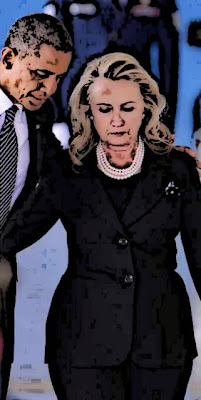 In her book "Hard Choices," Hillary Clinton doubles down on the administration's Benghazi lies, writing that President Obama "gave the order to do whatever was necessary to support our people in Libya. It was imperative that all possible resources be mobilized immediately."

Of the terrorist attackers, Clinton, the originator of the Benghazi video lie, says:

We'd like to introduce the former secretary of state to Eric Stahl, a recently retired major from the U.S. Air Force. Stahl was the commander and pilot who flew the corpses of the four killed at the Benghazi mission — U.S. Ambassador to Libya Chris Stevens, information officer Sean Smith and former Navy SEALs Glen Doherty and Tyrone Woods. Also on board were the survivors of the raid. All were taken to the U.S. military base in Ramstein, Germany.

Stahl, who — like Clinton — was for some strange reason never interviewed by the State Department's Accountability Review Board, says, no, we didn't do whatever was necessary and that none of the survivors knew anything about a spontaneous protest or a video that was put forth by her and by Obama repeatedly as the cause.

In fact, says Stahl, the State Department knew that night it was a terrorist attack.

Stahl told Fox News' Bret Baier that members of a CIA-trained Global Response Staff who raced to the scene of the attacks were "confused" by the administration's repeated implication of the video as a trigger for the raid, because it "knew during the attack ... who was doing the attacking."

The administration knew, according to Stahl, because immediately after leaving the consulate in Benghazi and moving to the (CIA) safe house, there were reports "that cell phones, consulate cell phones, were being used to make calls to the attackers' higher-ups."

Interestingly, a Defense Department targeting memo sent to the State Department two days after the attack, and two days before then-U.S. Ambassador to the United Nations Susan Rice spread the video lie on five Sunday talk shows, listed 11 suspects: four connected to the al-Qaida affiliate in North Africa known as AQIM, and seven connected to Ansar al-Shariah, a group with ties to the terrorist network.

"They knew from the get-go that al-Qaida was involved in the attack," said counter-terrorism analyst Thomas Joscelyn of the Foundation for the Defense of Democracies, "so the idea that the Obama administration didn't know that early on, or they suspected it was something else entirely, basically is willful blindness."

Stahl also disputes the claim that we could not have mounted a timely rescue attempt. That was always an odd explanation for not trying, since at the time no one knew how long the attack would last. He says he and his C-17 crew could have reached Benghazi in time to have played a role in rescuing the victims of the assault and ferrying them to safety in Germany.

"You would've thought that we would have had a little bit more of an alert posture on 9/11," Stahl told Baier. "A hurried-up timeline probably would take us (an) hour-and-a-half to get off the ground and three hours and 15 minutes to get down there. So we could've gone down there and gotten them easily."

At least the administration made sure that filmmaker was locked up, as Clinton promised the parents of the dead in front of their sons' caskets.

A quick look at the reviews of Hillary's fictitious history, shows Americans are not buying her lies.

Negative ratings are double the positive. In fact, there are almost no middle ratings.