TRIVIA QUESTION: How Many Stuntmen Were Killed During the Filming of The Road Warrior?

If you haven't seen the film Road Warrior at least a dozen times, I'm guessing you're a Soviet sleeper spy. The movie depicts a dystopian future in which gasoline is among the most precious of commodities and vicious gangs roam the land. In other words, somewhat like Chicago, but with fewer guns.

In any case, watching the vicious chase scenes, fight scenes, and crazy stunts, I got myself to wondering: how many people were killed filming this insanely awesome movie? 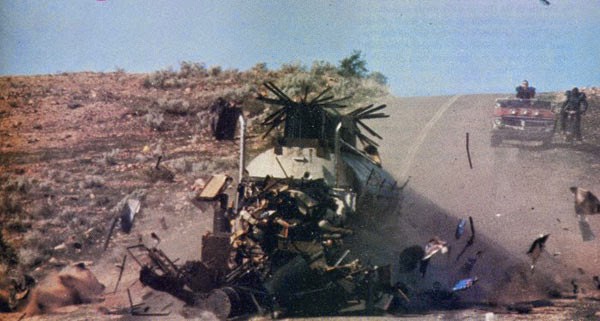 There were rumors that at least one stuntman died, however:

Steve Bisley denied this "myth" in a Japanese motorcycle magazine interview, which was held about ten years ago. He claimed that two stunt men were injured during the film shoot, but none of them sustained serious injuries. He also noted that this "myth" maybe created by the film's distributor as a promotional purpose.

Some cool facts about the set:

Stunt coordinator Max Aspin broke his leg during a stunt and was unable to return to the production...

...There were over 80 custom vehicles made for this movie. More than half got demolished...

For one of the explosions, airlines were notified and all the mines in the area were closed. Director George Miller: “I remember the shockwaves. They were huge.”

There were over 200 stunts performed in this movie...

Costume designer Norma Moriceau was inspired by an S&M leather shop near her home in Sydney.

Since it's on the Internets, all of this has gotta be true.

PTSD doesn't usually allow me to watch movies like that but there was something about "Road Warrior" that transcended mere destruction and noise (yes, I did wear ear plugs)

In my next life I am coming back as Mad Max, ummm...make that "Mad Maxine and Her Killing Machine".

The real question is how many audience members thought they were dying from being hit by flying car debris...

Well, since you mention it, Doug, check out Tom Hardy and Charlize in these stills from the reboot..which is taking forever.
http://www.worstpreviews.com/images/headlines/temp/temp4992.jpg