DEAR SEN. McCONNELL AND SPEAKER BOEHNER: Here are the Terms of Your Surrender 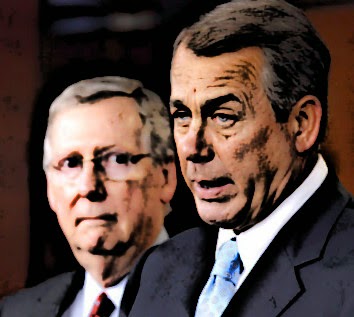 In your petty quests for power, you both spend more time, energy and resources plotting against your party's base rather than fighting the most lawless and destructive president in American history. The national debt will have doubled under this President, the IRS and other arms of the government have been weaponized, the Justice Department is busy race-baiting and attacking Obama's political opponents, China and Russia are rapidly arming up, Iran is rolling non-stop to acquire nuclear ICBMS, and the Middle East is on fire.

And still you focus on pathetic political infighting, as if this is some sort of game.

We've had quite enough, thank you.

The following are the terms of your surrender and they are non-negotiable:

1. Speaker Boehner: you will, on or before the departure of Eric Cantor from the position of House Majority Leader, name a suitable and real conservative to that role (e.g., Jeb Hensarling or Jim Jordan).

2. Senator McConnell: you will, on or before the departure of Eric Cantor from the position of House Majority Leader, name Senator Ted Cruz to the post of Ranking Member on the Senate Judiciary Committee and, should the Republican Party take the Senate, will name him Chairman of that committee.

3. You will both cease pushing for any Amnesty, immigration or other deal until the border is secure from the unfolding humanitarian and refugee crisis.

Failure to meet these requirements will result in the following actions:

1. Speaker Boehner: I will do my level best to encourage the 30 percent of Ohioans who supported your primary opponents to vote for your Democrat rival. As you know, it would not take many Republicans to defect to unseat you. There is no point in having a Republican Speaker of the House if he or she has no desire to resist the increasing epidemic of lawlessness.

2. Senator McConnell: Likewise, I will do my level best to encourage the 40 percent of Kentuckians who supported your primary opponent to vote for your Democrat rival. Again, it would not take many defections to unseat you -- and based upon the polling, you could lose regardless. I am convinced that there is absolutely no point in having a Republican Senate Majority Leader who is unwilling to fight.

A reply is unnecessary. Your actions will suffice.


Feel free to reproduce this post in its entirety.

Hell freaking yes! You couldn't have worded my own sentiments any better.

As I listened to Cantor's going away speech it was manifestly evident by its structure, wording and tone that it betrayed a man who was an insider, one who liked being part of the club, and he didn't understand why he lost. Remarks by Boehner revealed the same political stupor.
There must be a electoral blood bath in November if the Country is to survive, and frankly, it may be too late.
As the continuing malfeasance of the zer0 administration comes to fruition I believe there will be incredible, intense public anger, and the result could be trials to expunge, or even atone for the evil the American people have been subjected to. Pelosi will sob uncontrollably; Holder will go stoic;, Hillary will wonder what difference anything made; Barry will enter a tearful, catatonic state; and Reed will be drug into Court ever the loudmouth. We can't forget the professional politicians - the RINO's... I suggest their end should be permanent indentured slavery. They thought it was a game of give and take, I want to see wood on their backs and tears in their eyes.

Damn the torpedoes, full speed ahead. God's speed at that.

PLEASE count me in. I have many family members in Ohio and Kentucky who would love to get a phone call asking them to unseat these jelly fish. Let's DO IT.

"We The People have a fraud and usurper sitting in the White House going by the name of barack hussein obama using a stolen social security number , forged birth certificate and forged selective service registration card to prove he is a legal sitting US President .

"There are times when the tree of liberty will need to be refreshed by the blood of tyrants, and patriots." Our founders knew that over 200 years ago, but we, the people, are just now waking up that fact.

So one guy loses his primary and now the Wing Nuts are the new Rulers of the Universe? Grow up, white people. Your "level best" is irrelevant and pitiful. No one in Cincinnati or Kentucky is going to change his or her vote for you clowns.

It's time to go "Game of Thrones" on these bums in Washington and start putting heads on pikes!
Well, it's a thought!

I do not believe the answer to anything is to give a Democrat the seat, job, etc. This party must come together! Obama got elected because there was 'ba-ba-baby' if it isn't my candidate, I won't vote.
Also, there is no difficulty in closing the borders! Stop them at the front door of the schools. In 1993, the DOJ et.al. somehow got a law passed that it is illegal to ask for citizenship papers of parents enrolling their kids in public school. What ACLU thinking,anti-American fool came up with this? No papers; no education. THey will stop coming.

Copied to my page to increase hope and change.

Does the GOP want to lose; or are they just plain dumn?!@#$^@
Or a third choice is corrupt!