A Congressional Research Service report on illegal immigrants in the U.S. was released two days ago, though to read the funny papers you'd never know it. 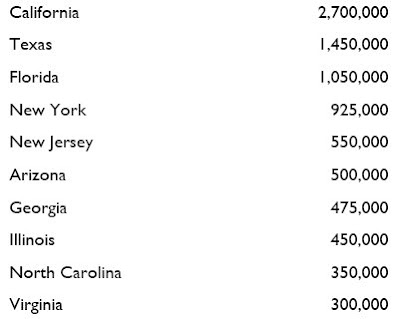 A couple of numbers are startling: most estimates put the total number of illegals living in the U.S. at 12 million. Between three and four million of the illegals here aren't working: i.e., they're absorbing benefits from taxpayers in the form of welfare, food stamps, free education, etc.

As for those who are employed, a full 5% of the U.S. labor force consists of illegal aliens. This is a disheartening finding when you consider that the U-6 unemployment/under-employment measure for U.S. citizens is nearly 20%. 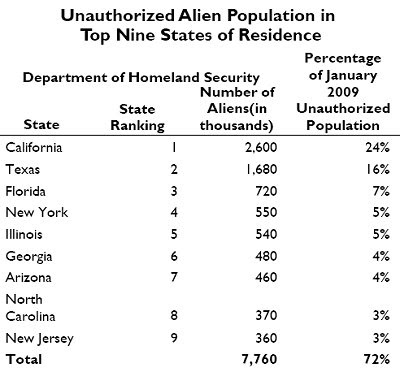 Thanks to "Sanctuary Cities" like San Francisco and Los Angeles, California's downtrodden taxpayers suffer the most.

Nearly one-quarter of all illegal aliens in the U.S. call California home.

Say, I wonder if all of the welfare, benefits, prison expenses and other infrastructure costs of millions of illegals have anything to do with California's $23 billion annual budget deficit? Or New York's catastrophic fiscal problems?

Nah, that's got to be a coincidence.

Good report. Thank you. Also, note 1/2 of all illegals live in just 3 states; CA, TX and FL. Do you think we have a border problem?

Florida, though, does not border any foreign country.

Has anyone noticed how much "new speak" is creeping in to the language? Orwell nailed the future.