Irony: Consider that the name of the dominant Latino lobbying group is National Council of La Raza ("The Race").

Irony: Consider that the motto of the dominant Hispanic student organization -- MEChA -- is Por La Raza todo. Fuera de La Raza nada ("For the Race, everything, outside the Race, nothing").

Irony: Consider that MEChA itself (which stands for Movimiento Estudiantil Chicano de Aztlán or "Chicano Student Movement of Aztlán") has a charter that explicitly endorses the overthrow of the United States government and its replacement with a racially pure "master race" ("we are Aztlán").

Irony: Consider that all of this insanity operates under the aegis and sponsorship of the University of Arizona and the state's taxpayers.

El Plan de Aztlan was adopted at the first National Chicano Youth Liberation Conference in Denver, Colorado, March 1969. The plan presented for the first time a clear statement of the growing nationalist consciousness of the Chicano people. It raised the concept of Aztlan, a Chicano nation, and the need for Chicano control of the Chicano community...

Reffering [sic] to the Democratic and Republican parties as "the same animal with two heads that feed from the same trough," the plan pointed out that to achieve the goal of self-determination, would require an independent political party with Raza nationalism as its "common denominator. 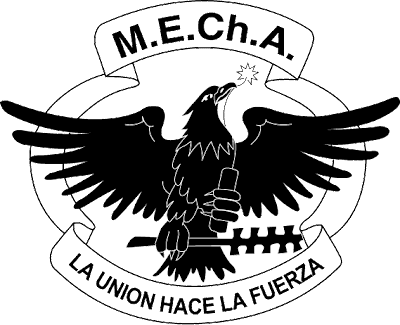 In the spirit of a new people that is conscious not only of its proud historical heritage but also of the brutal "gringo" invasion of our territories, we, the Chicano inhabitants and civilizers of the northern land of Aztlán from whence came our forefathers, reclaiming the land of their birth and consecrating the determination of our people of the sun, declare that the call of our blood is our power, our responsibility, and our inevitable destiny.

...[Our] love for our brothers makes us a people whose time has come and who struggles against the foreigner "gabacho" who exploits our riches and destroys our culture.

With our heart in our hands and our hands in the soil, we declare the independence of our mestizo nation. We are a bronze people with a bronze culture. Before the world, before all of North America, before all our brothers in the bronze continent, we are a nation, we are a union of free pueblos, we are Aztlán.

El Plan Espiritual de Aztl án sets the theme that the Chicanos (La Raza de Bronze) must use their nationalism as the key or common denominator for mass mobilization and organization. Once we are committed to the idea and philosophy of El Plan de Aztlán, we can only conclude that social, economic, cultural, and political independence is the only road to total liberation from oppression, exploitation, and racism. Our struggle then must be for the control of our barrios, campos, pueblos, lands, our economy, our culture, and our political life. El Plan commits all levels of Chicano society - the barrio, the campo, the ranchero, the writer, the teacher, the worker, the professional - to La Causa.

Nationalism as the key to organization transcends all religious, political, class, and economic factions or boundaries. Nationalism is the common denominator that all members of La Raza can agree upon.

1. UNITY in the thinking of our people concerning the barrios, the pueblo, the campo, the land, the poor, the middle class, the professional-all committed to the liberation of La Raza.

2. ECONOMY: economic control of our lives and our communities can only come about by driving the exploiter out of our communities, our pueblos, and our lands and by controlling and developing our own talents, sweat, and resources. Cultural background and values which ignore materialism and embrace humanism will contribute to the act of cooperative buying and the distribution of resources and production to sustain an economic base for healthy growth and development Lands rightfully ours will be fought for and defended. Land and realty ownership will be acquired by the community for the people's welfare. Economic ties of responsibility must be secured by nationalism and the Chicano defense units.

3. EDUCATION must be relative to our people, i.e., history, culture, bilingual education, contributions, etc. Community control of our schools, our teachers, our administrators, our counselors, and our programs.

4. INSTITUTIONS shall serve our people by providing the service necessary for a full life and their welfare on the basis of restitution, not handouts or beggar's crumbs. Restitution for past economic slavery, political exploitation, ethnic and cultural psychological destruction and denial of civil and human rights. Institutions in our community which do not serve the people have no place in the community. The institutions belong to the people.

5. SELF-DEFENSE of the community must rely on the combined strength of the people. The front line defense will come from the barrios, the campos, the pueblos, and the ranchitos. Their involvement as protectors of their people will be given respect and dignity. They in turn offer their responsibility and their lives for their people. Those who place themselves in the front ranks for their people do so out of love and carnalismo. Those institutions which are fattened by our brothers to provide employment and political pork barrels for the gringo will do so only as acts of liberation and for La Causa. For the very young there will no longer be acts of juvenile delinquency, but revolutionary acts.

6. CULTURAL values of our people strengthen our identity and the moral backbone of the movement. Our culture unites and educates the family of La Raza towards liberation with one heart and one mind. We must insure that our writers, poets, musicians, and artists produce literature and art that is appealing to our people and relates to our revolutionary culture. Our cultural values of life, family, and home will serve as a powerful weapon to defeat the gringo dollar value system and encourage the process of love and brotherhood. 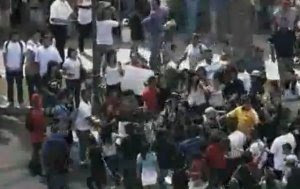 2. September 16, on the birthdate of Mexican Independence, a national walk-out by all Chicanos of all colleges and schools to be sustained until the complete revision of the educational system: its policy makers, administration, its curriculum, and its personnel to meet the needs of our community.

3. Self-Defense against the occupying forces of the oppressors at every school, every available man, woman, and child.

5. Economic program to drive the exploiter out of our community and a welding together of our people's combined resources to control their own production through cooperative effort.

6. Creation of an independent local, regional, and national political party. A nation autonomous and free - culturally, socially, economically, and politically- will make its own decisions on the usage of our lands, the taxation of our goods, the utilization of our bodies for war, the determination of justice (reward and punishment), and the profit of our sweat.

El Plan de Aztlán is the plan of liberation!

Lest you think I'm cherry-picking some ancient document, the person who published the document did so on February 12, 2006 as evidenced by this file tag.

Click the image to zoom, but suffice it to say that it reads:

Let me get this straight:

Trying to enforce our laws and secure our borders against this sort of balkanizing, violent, racially charged crap like this is wrong?

Sorry, folks, I'll tell you what's wrong. Racial divides of any kind. Separating people by their race, not by the content of their character. Race: which the Democrat Party obsesses over and loves to exploit.

They can't seem to get it through their thick heads: we're all Americans. We love our country. And for us to have a country, we must have borders. It's as simple as that.

And, as you can tell from the tripe above, we're not the racists in these here parts.


Update: 'No, That Arizona Law Doesn't Create a Gestapo Dragnet.'

The smearing of refried beans on the State Capitol to protest the enforcement of immigration law: epic.

And now, a thought experiment…

(Warning to liberals: as you are unaccustomed to thinking, you may experience some discomfort. Suggestions for symptoms include Tylenol for headaches and Midol for cramps)

…if the Tea Party were to protest an amnesty law passed in some liberal bastion, and were to smear refried beans in protest, how many outraged claims of racism would there be in:

The next four years?

And, would that outrage be justified? Perhaps. Thus, have we concluded that it is acceptable to use a racial stereotype, so long as it is the race using it? Ask any rapper.