Engagement with Syria working out well for Obama, Kerry and Clinton: Assad is arming Hezbollah with long-range Scud missiles

I wonder how all of those wonderful speeches, the flowery rhetoric and the humiliating, bended-knee outreach to the Arab Street is working out?

Syria has transferred long-range Scud missiles to the Lebanese Shiite militant group Hezbollah, Israeli and U.S. officials alleged, in a move that threatens to alter the Middle East's military balance and sets back a major diplomatic outreach effort to Damascus by the Obama administration. 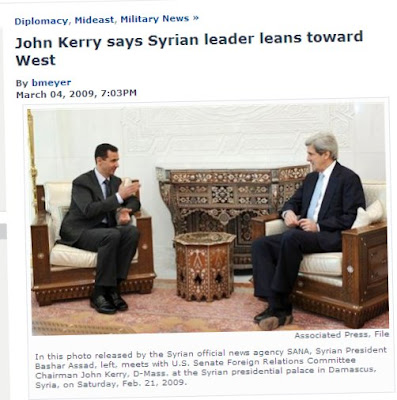 ...Republicans pressed on Capitol Hill to block the appointment of a new American ambassador to Damascus, according to congressional officials. The White House said it was pressing ahead.

The Scuds are believed to have a range of more than 435 miles—placing Jerusalem, Tel Aviv and Israel's nuclear installations all within range of Hezbollah's military forces. During a monthlong war with Israel in 2006, Hezbollah used rockets with ranges of 20 to 60 miles.

Israeli officials called Scud missiles "game-changing" armaments that mark a new escalation in the Mideast conflict. They alleged that Mr. Assad is increasingly linking Syria's military command with those of Hezbollah and Iran.

...President Barack Obama has made engaging Mr. Assad's government a cornerstone of his Mideast policy, hoping to woo Damascus into a regional peace process and lure it from a strategic alliance with Iran.

...A spokesman for Senate Foreign Relations Committee Chairman John Kerry, who went as an emissary to Damascus on April 1, said that he couldn't comment... Detractors of the White House's policy of engagement with Damascus seized on the news Tuesday as evidence Mr. Assad has no intention of breaking Syria's strategic ties to Tehran and Hezbollah.

... "It's increasingly hard to argue that the engagement track has worked," said Andrew Tabler, a Syria analyst at the Washington Institute for Near East Policy, a regional think tank with no party affiliation that some view as pro-Israel.

Little wonder the Democrats are known far and wide as "The Party of Weakness".

Every day proves that the only people who are truly pro-Israel are Conservatives. Yeah, I know 78 Senators signed that letter to Obama. But none of the Senators from the left side speak out against Obama's policies - even the ones they claim they are against in that letter.

And yet, liberal Jews still vote en masse for the Democrats.

I can't figure out what the appeal is for us Jews, nor with the black community (aside from Teh Won being a brother). Is it because they just want the free stuff? Seriously, don't they even think for a moment as to why their communities are a disaster?

Guys like Sharpton, Jackson and the rest of the Dems have destroyed the communities they claim to take care of. The same holds true for the Palestinians.

Until they wake up (and this goes for my fellow Jews, as well), and realize how damaging their allegiances to the Democrat Party are, they will doom themselves for further generations (assuming they survive).