Very cool: track home energy usage by plugging in a single sensor into an AC outlet

The company, Zensi, specializes in technology for monitoring home-energy usage by plugging a sensor into an outlet. It was developed at the UW and Georgia Tech, where Patel was previously a graduate student. 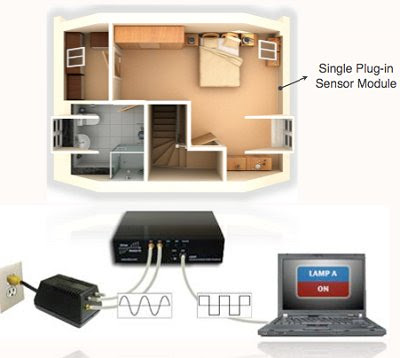 The idea is to dramatically simplify a process that can otherwise require working with an electrician, accessing a breaker panel, or other complicated approaches, explained Patel, 27, an assistant professor in the UW Department of Computer Science & Engineering. After it's plugged into the wall, the device infers energy consumption by sensing a variety of signals that appliances, electronics and other machines inadvertently send over power lines in the home.

Powerline Event Detection (PED) uses a single plug-in sensor that monitors the noise on power lines. It can identify and classify various events (e.g., a washing machine turning on and off) through their unique signatures.

By observing actuation of certain electrical devices, the location and activity of people in the space can be inferred and used for applications that rely on this contextual information. For example, detecting that a light switch was turned on can be an indication that someone entered a room, and thus an application could adjust the thermostat to make that room more comfortable. We can also detect other human-initiated kitchen events, such as a light turning on inside a refrigerator or microwave when its door is opened. The combination of these events may indicate meal preparation. Our approach also has implications for providing a low-cost solution for monitoring energy usage... 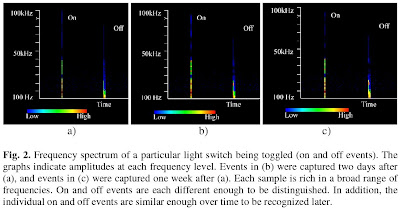 An application could log when particular electrical loads are active, revealing how and when electrical energy is consumed in the household, leading to suggestions on how to maintain a more energy-efficient household. In addition, because our approach is capable of differentiating between the on and off events of a particular device in real time, those events can be “linked” to other actuators for a variety of home automation scenarios. One can imagine a home automation system that maps the actuation of a stereo system to an existing light switch without having to install additional wiring.

at 7:32 PM
Email ThisBlogThis!Share to TwitterShare to FacebookShare to Pinterest
Labels: Engineering, Scitech

Having been an NCIS watcher, this gizmo looks _VEEEEry_ interesting...!

this knocks the legs out from one argument for "smart meters" - that only they can inform a householder of his energy consumption.

Of course, said householder usually has manually activated said energy consumptive device so could very well rely on a device that came free - his brain.