For all of his talk about reducing the spread of nuclear weapons, the President's doing a bang-up job of neutron-bombing the economy

The new health care bill has already resulted in the cancellation of the construction of at least 60 new hospitals and thousands of beds. That's because doctor-owned facilities are effectively banned by DemCare. And the President's awesome stewardship of the economy continues to pay dividends, as the thousands of private sector jobs that would have resulted from these hospitals have been vaporized, kinda like they were hit with a neutron-bomb.

The jobs are gone -- and only the people remain.

Evidence for the non-stop eradication of the private economy continues to roll in, most recently in terms of our bankrupt Treasury Department, which is experiencing -- uhm -- unusual outflows this tax season. 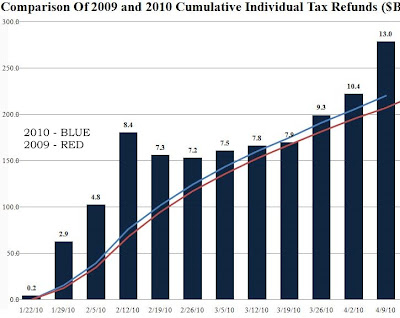 Through the 14th week of the calendar year (not fiscal), cumulative tax withholdings in 2010 are $477.9 billion, $13.5 billion less than the $491.4 billion in 2009. Yet regardless of what the only organic source of revenue for the Treasury looks like, the Treasury (and IRS) are issuing ever increasing tax refunds with the abandon of a drunken sailor. The chart below compares how many more refunds on a cumulative basis have been issued in 2010 compared to 2009. Oddly, it is also $13 billion, however in the wrong direction. 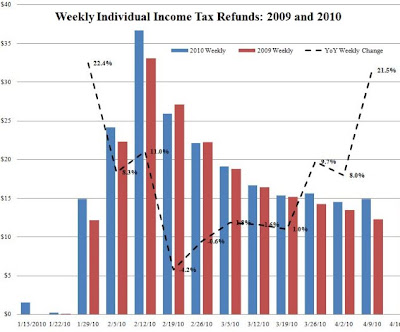 Net out refunds from gross withholdings, shows just how blatant the lies is that the Treasury is collecting more money than previously. On a cumulative basis 2010 compared to 2009 has seen a net $26.5 billion less withheld by the Treasury. We fail to see how this number is in any way an indication of efficient money management. Coupled with record unemployment benefit outlays, surging discretionary spending, and record net bond issuance, and the US Treasury is rapidly realizing that should it be unable to fund itself using its Bernanke-Jiabao Tungsten credit card, it is all over.

The following graph illustrates just how bad this Democrat Congress and administration have mismanaged the economy. Despite trillions in 'Stimulus', Omnibus spending bills, limitless unemployment checks, and every other manner of Orwellian central planning program, the government continues to hemorrhage cash this year compared to last. 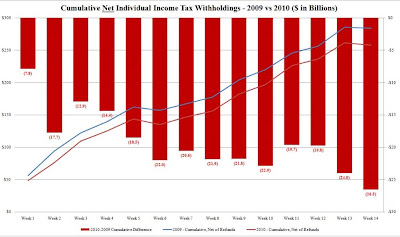 But I blame Bush. Or Cheney. Or Halliburton. Or anyone but Obama, Pelosi and Reid.

Because that would be racist. Or so the Democrats tell me.

Doug, you truly are doing a bang-up job. Great work showing the damage that is being done to economy by this Administration and this Congress.