The scale of the three-year old drug war raging in Mexico -- and bleeding into the United States -- is difficult to comprehend. It takes a few illustrations to help make the point. 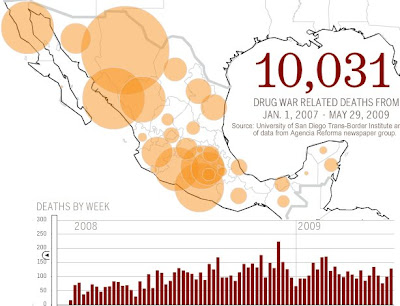 Thanks to the Los Angeles Times' Drug War project, the scope of the problem is as apparent as it is horrifying. 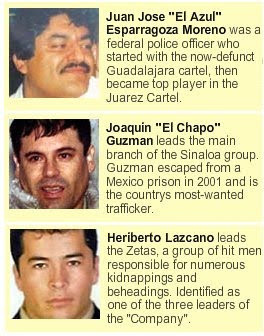 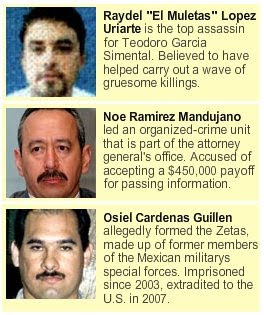 Many of the key players operate with impunity in Mexico and freely cross over to the United States with the help of corrupt Mexican officials. And violence is worsening as the Mexican government appears too crooked and too feeble to stop the drug-lords. 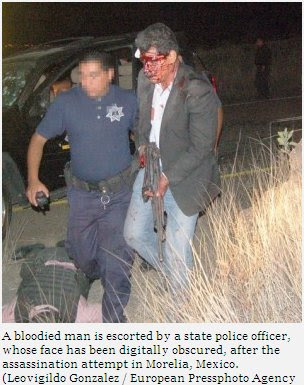 Three days ago in Morelia, the state public security chief was ambushed after leaving a state fair. Four were killed and the official was wounded after her armored SUV and bodyguard complement were attacked.

Four days ago in Ciudad Juarez, a 17-year-old passerby and at least seven officers were murdered as two police cars were ambushed. Mexican officials state that the vicious, midday assault was an attempt to retaliate for recent drug arrests.

Seven days ago in Morelos, a news report described a bloody swatch of lawlessness: "Bodies are turning up in piles, hanging from overpasses, chopped up and thrown together in trash bags dumped by the roadside... Nearly 50 people have been killed this year in gun battles and gangland-style executions."

The week before, the bodies of six young men -- some teenagers -- were found in the resort town of Acapulco. Parts of other bodies were found a few days later stuffed into a black plastic bag.

All told, more than 22,000 have died since President Felipe Calderon launched a new crackdown on the drug cartels.

22,000 dead. Beheadings. Hangings. Mass-murders. Bodies sliced into pieces. Killings of cops, government officials, judges, and innocents -- with the violence spreading daily into the U.S. and beyond. Remember. Remember this as the open-border Democrats pander to illegal aliens while they throw the legal residents of Arizona -- of all races, creeds and colors -- to the wolves.

Thanks for providing your nice information. I like your site!! I invite you to take a tour on my dayodental website for more details at Dentist In Mexico