I've given Lindsey Graham plenty of grief over the years, but he deserves our praise today if Ben Geman's report is accurate.

Sen. Lindsey Graham’s (R-S.C.) decision to walk away from Senate talks on climate change and energy legislation – at least for now – has prompted the measure's remaining architects to scuttle Monday’s planned unveiling of the bill. 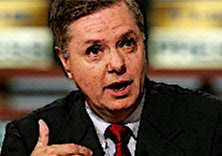 Sen. John Kerry (D-Mass.), who is crafting the bill with Graham and Sen. Joe Lieberman (I-Conn.), announced what he called a temporary postponement and said he remained committed to action this year on a sweeping climate and energy measure.

...Graham is upset over Democratic plans to take up immigration legislation this year – he accuses Democratic leaders of pushing forward immigration “haphazardly” and calls it an election-year political gambit.

Kerry praised Graham’s work on the climate effort and expressed hope that he would rejoin the initiative "once the politics of immigration are resolved," but vowed to press ahead one way or the other.

If Graham is doing his best to delay and deflect the National Social Democrat agenda, I salute him.

His office number is 202-224-5972. You can help strengthen his resolve by offering a word of encouragement.

Graham is ticked off that amnesty for all illegal aliens might take a back seat.

Graham had amnesty ALL LINED UP.

It's just that simple. Graham is a scum.

I agree. Graham is a limp noodle at best. He needs to be shown the door and handed his hat.

I've been as hard on Graham as anyone. If he's setting up the Democrats with a bunch of feints, even unintentionally, I'll thank him.

The Socialists have taken health care The EPA with the "navigable"
clean water act change, C02 rules. Add the Wall Street financial manipulation bill, and you find that the Government has almost completed it's plan to control every industry, farm and business.

Graham's too stupid to set up anyone--except his constituents.

As I said in my post, he just wants attention. Even though he wants amnesty, he gets more credit being one of the three "saviors of the planet."

I have grown to despise that damn weasel. You have to wonder why it is that he wants amnesty so badly.

You have to give him credit??? Oh, please. This doesn't change Graham's stripes at all. This is nothing but posturing. He still supports the damn bill. Hell, he's still a co-sponsor.