The Incurious Sophistry of The New York Times

New York Times, 5 January 1995, Iran May Be Able to Build an Atomic Bomb in 5 Years: "Iran is much closer to producing nuclear weapons than previously thought, and could be less than five years away from having an atomic bomb..."

New York Times, 13 March 2003, Iran Plays the Waiting Game: "It's a remarkable study in Middle Eastern contrasts: as Saddam Hussein scrambles to deceive the West about his illegal weapons, Iran, like the proud father of a precocious child, decides to show the world that it has a new underground uranium-enrichment lab... and the country's program is likely within two years of building [nuclear weapons]."

New York Times, 11 August 2005, Iran's nuclear program: A crisis of choice, not necessity: "The growing crisis over Iran's nuclear program can be averted if the precious lessons from Iraq, above all the need to avoid unsubstantiated accusations of proliferation, are avoided - particularly given that U.S. intelligence agencies admitted recently that Iran is at least 10 years away from making the bomb." 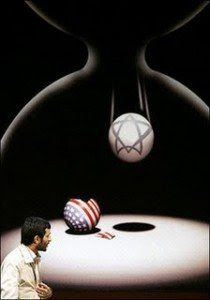 New York Times, 7 September 2005, Nuclear Weapon Is Years Off For Iran, Research Panel Says, "A leading British research institute said Tuesday that Iran was at least five years away from producing sufficient material for ''a single nuclear weapon,'' and that it could make one only if it chose to ignore international reaction..."

New York Times, 3 May 2006, Very Bad and Worse — the Options With Iran : "Here are two final thoughts, one comforting, one not. First, there is time: Iran appears to be several years from making nuclear weapons..."

New York Times, 15 May 2007, Inspectors cite big gain by Iran on nuclear fuel: "...at this pace, Iran could have 3,000 centrifuges operating by June -- enough, if the uranium were enriched further, to make one bomb's worth of nuclear material every year."

New York Times, 28 September 2008, An Arms Race We’re Sure to Lose: "...Iran will have produced at least 1,500 pounds by mid-January [2009]. Re-circulated, this could produce 35 pounds of weapon-grade uranium, enough for a bomb. (In fact, this was about the amount called for in the implosion device that Saddam Hussein’s scientists were trying to perfect in the 1980s; according to intelligence sources..."

New York Times, 14 April 2010, Officials Say Iran Could Make Bomb Fuel in a Year, "...military officials said Wednesday that Iran could produce bomb-grade fuel for at least one nuclear weapon within a year, but would most likely need two to five years to manufacture a workable atomic bomb."

Only a few grains of sand remain at the top of the hourglass.

And, thanks to Pinch Sulzberger and his posse of useful idiots, Iran's Mullahs will have succeeded in possessing a weapon the likes of which other terrorists have only dreamed.

Not a whit of serious analysis. Not a column-inch on the decades of obfuscation by the U.N. and the I.A.E.A. Not a single sentence devoted to Iran's declaration of war on the West.

This is what passes for a newspaper in the age of nuclear terrorism. The periodical that ignored the Holocaust is doing its best to expedite another act of genocide.