Another Soviet-style performance: Obama's NASA speech was completely staged -- not a single NASA worker was permitted to attend

Interviewed on MSNBC, a visibly shaken Jay Barbree -- the longtime NBC science correspondent -- described the duplicity of President Obama. Put simply, Obama's campaign rhetoric -- that he would preserve NASA's cutting-edge science and engineering expertise -- was, like so many of his promises, a fabrication. And he couldn't even tell them to their faces.

BARBREE: ...I'm a little disturbed right now, Alex. I just found out some very disturbing news. The President came down here in his campaign and told these 15,000 workers here at the Space Center that if they would vote for him, that he would protect their jobs. 9,000 of them are about to lose their job. He is speaking before 200, extra hundred people here today only. It's invitation only. He has not invited a single space worker from this space port to attend. It's only academics and other high officials from outside of the country. Not one of them is invited to hear the President of the United States, on their own space port, speak today. Back to you Alex. 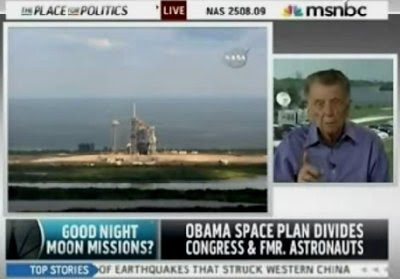 WITT: Alright Jay I can understand why that would certainly get you a bit upset. I will say, on behalf of the Obama administration, they contend that 2500 new jobs will be created, even more, they say, than the 2012 Constellation would have created, that program. So I know all this remains to be seen, but understandably we get why you're upset, right now. Along with many others down there. Let's see if the President clears that up later today. Jay thanks so much.

Gee, if MSNBC speaks "on behalf of the Obama administration", I wonder if they get franking privileges for their mail as well?

I think I need a new blogging category called "Broken Promises", because the old Clinton record was just shattered.

Linked that right up with the title "The Potemkin Presidency" a concept with real legs.

Why are your headlines always better than mine?

I sense a conspiracy.

I got paid for doing it for a long, long time. On the other hand, you're investigative pieces are far and away better than mine and most others around so I'd say that was much more important.

"Jay thanks so much." ...now bugger off and stop peeing on the motorcade.

Nothing says objective journalism quite like speaking on behalf of the administration. Borscht anyone?

Wow, this is worse than the six plants that Hilary had.

Doug, a quick suggestion:
In your sentence, "was, like so many of his promises, a fabrication. And he couldn't even tell them to their faces.", the last phrase is highlighted, so people will know to click on it. However, I must say that on my computer, which is set just fine, the highlighting is barely noticeable. Please consider changing the way you highlight words in your posts. I'd hate to miss a good link!

If you saw the TV coverage, you saw many people in various uniforms.

I hope you all let others know that this story is not true. Doesn't matter if we like or agree with him, our own honestly and integrity counts.