I rate the Obama Recovery a 'good, solid B+'

Tyler Durden spotlights the stellar performance of this year's individual tax withholding flows into the U.S. Treasury compared to the same periods in 2009.

We promised we would update the US Treasury individual tax withholdings comparison between 2009 and 2010 by 4 week bucket. Week 16 data is now out and the result is below. It speaks for itself. 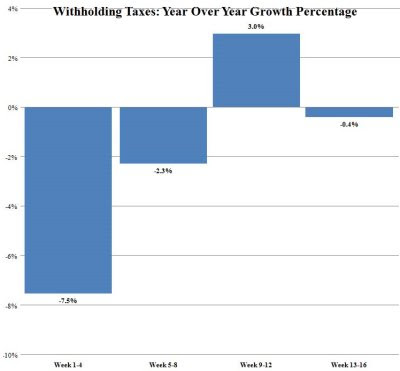 ...As for withheld corporate tax, we would discuss that too... if there was anything to discuss.

The world's investors are so confident in the steady leadership of the Obama-National Socialist Democrats that investors around the world are scrambling to get their hands on gold, "either in physical form or via ETF [Exchange Traded Funds]".

Investors bought 5.6 net tonnes of gold via exchange traded funds (ETFs) in Q1 2010, bringing the total amount of gold in the ETFs that we monitor to a new record of 1,768 tonnes, worth US$63.4 billion at the quarter-end gold price... 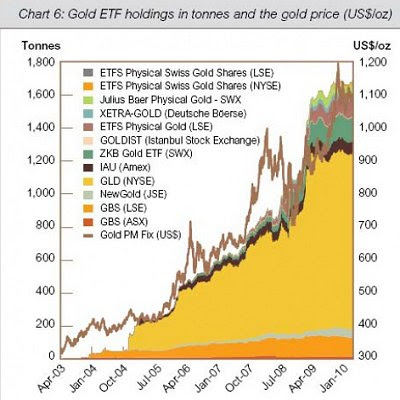 ...ZKB Gold ETF and Julius Baer Physical Gold ETF, both listed on the Swiss Exchange (SWX), recorded the strongest inflows during the first quarter, adding 10.2 and 8.1 tonnes respectively, as interest in the Swiss-based securities continued. These funds remain small, however, compared to SPDR® Gold Shares, or GLD as it is known, listed on the NYSE Arca and cross-listed in Mexico, Singapore, Tokyo and Hong Kong with 1,130 tonnes (worth US$40.5 billion) in assets.