Good News: effective April 22nd, the EPA will fine you $35,000 if you replace 10 windows in your own home 'incorrectly'

Now that the salt wars have died down a bit -- and you begin to think the federal government couldn't become any more intrusive -- the EPA shows up to happily disabuse you of your quaint notions. In that context, please consider the "major new EPA rules" that go into effect on 22 April, which dramatically increase the cost, complexity and penalties associated with construction projects. As for you home handymen? You're specifically targeted.

If your home or commercial property was built before 1978, the EPA will fine you $3,500 for each 'incorrect' sanding, cutting and rehab project. Which means if Joe Homeowner replaces 10 windows in a home incorrectly, he will face a $35,000 fine. 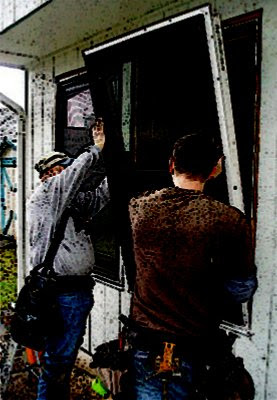 According to the Federal Environmental Protection Agency (EPA), construction activities performed in homes and child-occupied facilities built before 1978 which can create hazardous lead dust and chips that are harmful to children and adults must be conducted by RRP-certified renovation firms, using renovators with EPA RRP- accredited training, and following the work practice requirements of the rule.

The EPA said 'lead paint is in most pre-1978 homes. We estimate about 38 million homes and apartment units, or 40 percent of the housing stock, contains lead paint.' The Agency’s new law will require all contractors be certified to remove lead paint. Previously, no certification was required and homeowners could ''opt-out'' of lead-safe practices if no children under six years old or pregnant women lived in the house.

Sean Lintow Sr., owner of SLS Construction, has already spent the money to become certified. He estimates one third of his jobs will be affected by the rule changes. He says he "will need to buy new equipment to comply with the rules, and I will always need someone certified on site."

Lintow said he also expects cleanup will longer. For example, instead of throwing drywall into a dumpster, his workers will have to first remove any hardware (like nails and screws), wrap the drywall in plastic, and take it out of the house in trash bags. Then he'll have to wait at least an hour after cleaning to determine if any lead dust is present.

Unelected bureaucrats at the EPA, like the old Soviet Politburo, are dreaming up regulation after regulation, dictate after dictate; they are inventing new rules to steal more and more of your freedom.

When the federal government can tell you how much water can flow through your shower head, how many gallons your toilet tank can hold, how much salt you can put in your soup, what kind of toilet paper you can use, what kind of light bulbs you must buy -- when they can do all of those things, there are no limits to their power. They are no longer a federal government but have become instead a national government.

Not to put too fine a point on it, but as it pertains to government encroaching on our bathrooms, the modern Democrat Party is using the Constitution as toilet paper.

I kid you not... "Certified renovator performed post-renovation cleaning verification (describe results, including the number of wet and dry cloths used."
olds-mo william

Lisa Jackson, EPA head, is a dangerous person. She will not stop this kind of madness, being self-afflicted with her own...

The next step would likely be the restriction of home renovation materials to licensed contractors.
This will drive more contractors to the growing underground economy. Historically, people have always found ways around bad regulations and taxes further eroding the respect for the law in general. In the 1970's, trash bins were full of poorly designed car pollution control equipment.

So they're worried about pregnant women's exposure to lead. Well, that's just rich--considering that these are the same people who think a woman has a right to KILL the little tyke DELIBERATELY if she chooses to.

Thanks a lot...
After over 30 years, I will be finding a different profession in the very near future.
"I've taken all I can stanz 'cause I can't stanz no more..."

Just brilliant. We can't sell houses in this market as it is, and now the EPA adds onerous new regs that will make make most existing homes very unattractive ... That little fixer-upper just became an EPA leg-hold trap that you can't afford to fix and no one will buy.

Many replacement window dealers are still unaware of the new requirements, industry executives report. And many who are aware of the requirements are concerned about the costs involved and the potential impact on their businesses.

havent you all checked out the new pressure cleaning on the post 1978 homes .There way will cost 2500.00 to clean 1200 sq ft home.imagine that

So if the installer isn't a union shop...just your average "handyman" from church or elsewhere, aka an "uncertified" installer, you'll owe several times the cost of the window, regardless of actual installation quality?

Contractors across the country must take additional precautions when renovating houses where children could be exposed to lead dust from old paint, a safety measure that could add thousands of dollars to projects just as the remodeling industry tries to recover from the recession.