Chuck Schumer in bed with both Goldman Sachs' John Paulson and Bernard Madoff: but, remember, Democrats are for the little people

On Friday the SEC slapped a civil suit on Goldman Sachs. The charges are so egregious they make Bernard Madoff look ethical by comparison. 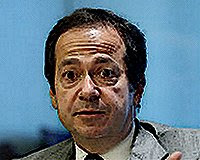 [Hedge fund billionaire John] Paulson goes to Goldman Sachs and asks the investment bank to create mortgage-backed bonds that he could short. Goldman Sachs agrees, taking a $15 million payment from Paulson for doing so. But Goldman goes a step farther by allowing Paulson to pick the mortgages that would be bundled into bonds — the mortgages that Paulson thought would be most likely to fail. Goldman then sold those tainted, Triple A-rated bonds to unwitting Goldman clients, collecting another hefty fee in the process. Like Paulson, it too placed secret bets that the bonds it had sold to trusting clients would fail.

Paulson and Goldman are alleged to have created the investment vehicles to fail -- they went short and Goldman got to sell them to investors who were long. Gee, I'm no expert, but that seems a tad conflicted.

Paulson, the hedge fund manager, is a good friend of none other than the menacing sleazebag known as 'Chucky Schumer', senior Senator from New York. 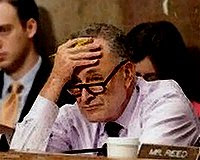 John Paulson, the hedge fund short-artist in the middle of today's SEC suit against Goldman Sachs, recently helped raise money for Sen. Charles Schumer (D., N.Y.), referring to the Senator in a fund-raising letter as "one of the few members of Congress that has consistently supported the hedge fund industry."

Back in the good old days before hedge-fund managers were greedy corporate fat-cats and Democrats were selfless crusaders for Main Street, Schumer was instrumental in preserving "carried interest" tax accounting that let folks like Paulson list their fees from managing trades as interest and capital gains instead of income, meaning that they are taxed at 15 percent.

That's right: for all of their tripe about protecting the "little people", Democrats were in bed with the hedge fund billionaires and even had their gains categorized in such a way that they pay less federal taxes than you and I.

And speaking of Madoff, you may remember that Schmucky Schumer was intimately familiar with the author of the world's most notorious Ponzi-scheme (after Social Security, of course).

How did Madoff keep himself insulated from regulators and government oversight? As you might expect, he greased the skids. And Schumer was one of the primary recipients of Madoff's grease. 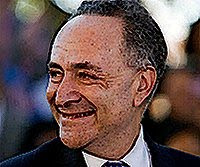 "My money, I'm returning," Schumer said... The $100,000 Madoff donated to the Democratic Senatorial Campaign Committee, run by Schumer until last month, should also be returned, but "that is their decision," Schumer said...

A spokesman for the committee, now headed by Sen. Robert Menendez (D-N.J.), said, "We're reviewing it."

You may also recall that the top three recipients of Fannie Mae's campaign contributions -- before it collapsed and precipitated the mortgage meltdown -- were all Democrats: Chris Dodd (D-CT), Barack Obama (D-IL) and John Kerry (D-MA). Obama's presence on the list is particularly troubling as he was only in the Senate for a few months before he embarked on his run for the presidency. 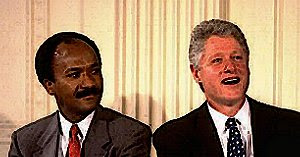 I need not mention that Fannie Mae execs Franklin Raines ($90 million in compensation), Jamie Gorelock ($26 million) and James Johnson ($21 million) were all Democrat operatives linked with both Bill Clinton and Barack Obama.

Everywhere you look in the financial meltdown, you spot the hands of Democrats: from Bill Clinton, to Chuck Schumer, to Barney Frank, Chris Dodd and Barack Obama.

And since legacy media won't report the truth -- won't hold their feet to the fire, it's up to us to spread the word. The media apparently has their hands full trying to link the Oklahoma City bombing to the Tea Party movement.

Putting Democrats in charge of 'financial reform' is like giving a teenager the keys to the Porsche and a handle of Jose Cuervo. Misery and destruction are certain to follow.

Here's another perfect example of Alinsky's Rule #4 for the GOP to use: hold them to their own standards. The GOP have allowed themselves to be victims of that rule for way too long. They need to start turning the tables on the Dems. The Dems are making it real easy for them in so many ways.

That failure to disclose is abominable. Yet, this is not a new discovery and Obama expressly saved Goldman and made sure it got its bonuses for the guys who did this.

Hedge fund managers should be terminated with prejudice.

Senator Lincoln has introduced the type of bill needed to put a stop to the Washington money changers.

Even the White House isn't in favor of her bill which give all the sunlight and transparency needed to keep these jackals under control.

Lets push for full disclosure and stop the guessing!
.

I enjoyed reading your recent post. I glad that now the bold face hypocrisy is getting some exposure. I hope conservatives continue to expose the fiendish appetite liberals have for weath and power, they claim to rail against, also the wealthy and powerful wall street firms have supporting liberal democrat politicians. If Bernard Madoff was a staunch republican the press would hang that around the neck of the GOP. Do you think all this is happening now 6 months before the election there is enough time to repair the fallout?

One final thought, I wonder when it is time for Obama and his ardent supporters to relinquish power do you think ACORN and SEIU will be part of the exit strategy?
Alan Albert

I am presently in litigation with Fremont Reorganizing, Goldman Sachs dba Litton Loan Servicing, et al., (2 different cases) for about 2 years now. The main issue with the complaint is a fraudulent loan originated by Fremont in June 2006. This in turn produced an array of other
issues: unsigned deed of trust, over billing issues, lost payments, excessive balloon payment, back dated assignments, illegal non-judicial foreclosure documentation, missing documentation, illegally reporting to my credit, falsifying declarations, 6 week TRO's, court procedures not followed, judges wait until the courtroom is cleared to rule against a TRO (both times); retired (78 year old) judge ruled against a seated judges TRO where the retired judge took 30 minutes to read a 300 page brief. The whole time they have been ignoring my request and failing to give me the required documentation so that I can rescind the loan. Goldman Sachs dba Litton Loan Servicing has been aggressively trying to foreclose on my property. I believe to cash out for insurance reasons. (It's over a million dollar loan) I have invested over $400,000 into this property for the past 5 years and if I had known about this mortgage meltdown game played by Wall Street I would have never proceeded with this Real Estate transaction. The Media and the Government has not once addressed or helped the borrower, namely me, who also has been damaged by these defaulted CDO's.

A Time line of what's going on with Goldman Sachs to show how they are scheming to pursue foreclosures for the insurance by acquiring distressed, shelled fraudulent companies which will eventually or haven't already gone BK...

Here is the link to my blog http://bushnellcomplaint.blogspot.com/ if you want to download court documents pertaining to my case.

Note: My wife is pursuing individuals who are interested in joining her in a class action lawsuit with regards to violation of her community property rights in a wrongful foreclosure. If you are in a community property state and a spouse is not on title you may have grounds for legal action.