Britain's National Health Service Suffered the Most Data Breaches of any UK Organization since 2007: 287

The Beeb confirms what you could probably guess: Britain's National Health Service does a really lousy job of protecting its patients' sensitive health records.

The NHS has reported the highest number of serious data breaches of any UK organisation since the end of 2007 [with] 287 breaches ... in the period. 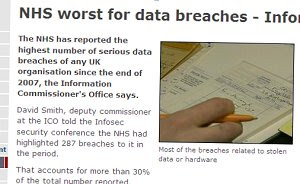 That accounts for more than 30% of the total number reported.

The NHS - the UK's largest employer with 1.7m staff - is in the process of rolling out digital patient records. [Ed: what could possibly go wrong?]

Richard Vautrey, the deputy chair of the British Medical Association's GPs committee thinks the number of breaches reflect the size and complexity of the NHS as well as its culture of openness.

But don't worry, folks. President Obama has re-tasked Joe "BFD" Biden, moving him from stimulus fraud-fighting to streamlining our transition to a national health records database.