When did it become acceptable to put your children and grandchildren into hock? I think it was about the time public sector unions came into vogue, thanks to the Democrat Party.

Travel east to Greece and witness the beginning of the end -- not due to the free market, but due solely to union-organized socialism.

George Papandreou, Greek prime minister, told parliament on Friday that adoption of a rigorous three-year austerity programme being drawn up by the European Union and International Monetary Fund was “necessary . . . for the country’s survival.” 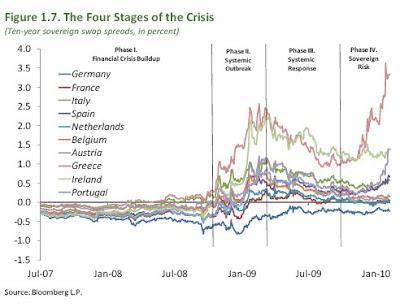 Mr Papandreou was defending his socialist government’s decision to seek a multibillion-euro rescue package from its eurozone partners and the IMF against strong opposition from leftwing parties and trade unions.

“What matters most is the survival of the nation – that is a red line (that cannot be crossed),” he said.

Despite the dire circumstances, Greece's version of the SEIU isn't playing ball. On Wednesday, a general strike is planned, which will shut down all flights into and out of Athens International Airport.

There are some knowledgeable observers who think that Greece is the tripwire ready to bring the whole house of cards down.

There is a notable breakout in the financials index — which represents the cost of insuring the senior debt of 25 European financial companies against default — at the beginning of April. From the chart we can tell it’s the first such break since at least January 2008. 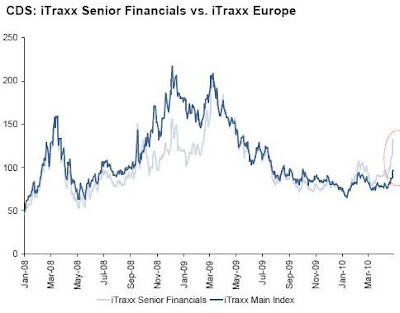 Financials were only stabilised thanks to the massive intervention of sovereign states. They took much of the ‘insolvency’ out of the financial system by transferring the bad loans of banks directly onto their own state balance sheets — sometimes directly, sometimes through guarantees.

But now that sovereigns are under pressure, due to their own deteriorating budgets, those financial guarantees might be standing on shaky ground. 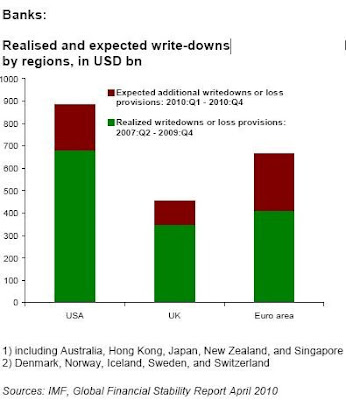 ...whereas the US banks will only have to recognise 20% of the write-downs anymore this year, the additional need for write-downs among Eurozone banks is higher... 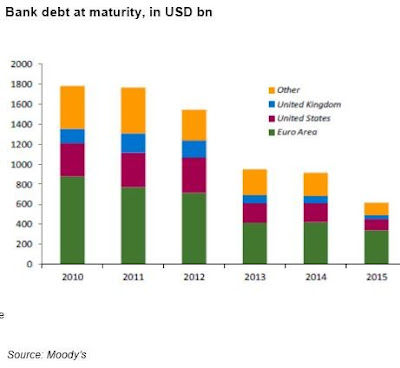 According to the IMF, banks are facing refinancing needs of USD 5,000bn [five trillion dollars] in the next three years.

The bank debt rollover challenge is a major obstacle to prosperity, which even neo-Statist Paul Krugman grudgingly admits.

[A]ny move to leave the euro would require time and preparation, and during the transition period there would be devastating bank runs. So the idea of a euro breakup was a non-starter.

...[B]ut what if the bank runs and financial crisis happen anyway? In that case the marginal cost of leaving falls dramatically, and in fact the decision may effectively be taken out of policymakers’ hands.

...Think of it this way: the Greek government cannot announce a policy of leaving the euro — and I’m sure it has no intention of doing that. But at this point it’s all too easy to imagine a default on debt, triggering a crisis of confidence, which forces the government to impose a banking holiday — and at that point the logic of hanging on to the common currency come hell or high water becomes a lot less compelling.

And if Greece is in effect forced out of the euro, what happens to other shaky members? 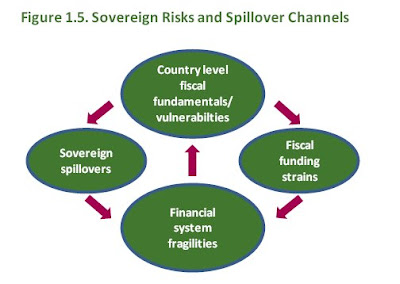 The tenuous ties of currency, investments and politics will be tested in the weeks to come like never before.