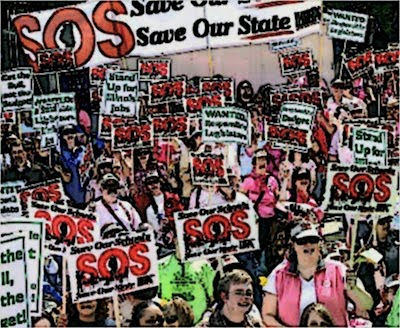 Earlier this week, 15,000 people protested in Springfield, Illinois not to register discontent over the ever-increasing size of government, but to lobby for more taxpayer money.

Representing the SEIU, the AFT, the NEA and other public sector unions in Illinois, the group demanded to be kept whole despite the fact that their exorbitant salaries and benefits are increasingly lavish compared to their private sector equivalents. 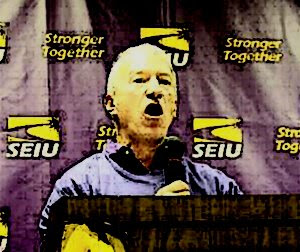 Illinois has two looming financial problems: a $13 billion budget deficit and a $60 billion pension funding shortfall. According to the Chicago News Cooperative, Illinois will be forced to sell another $4.6 billion in securities in 2011 after selling $3.5 billion in 2010. The financial markets will likely respond with disgust: investors in the '10 issue were led to believe that it would be many years before another bond issue was necessary.

Northwestern economic Joshua Rauh says, in fact, the pension shortfall is far more dire than the $60 billion estimate. He projects that persistent underfunding on the part of the state had led to a $166 billion shortfall for the three largest pension plans alone.

Governor Patrick Quinn's answer? More borrowing, including $7 billion in brand new debt. But state taxpayers are already spending $540 million annually on interest alone for a 2003 bond issue that was supposed to close the funding gap. In fact, the current gap is just as bad as it was in 2003.

Net net: in only eight years time -- sooner if their investments go south -- the pension plans will be utterly bankrupt.

Isn't Democrat-controlled government great? Letting the public sector unions and corrupt liberals set policy is tantamount to societal suicide. California, New Jersey and New York are next on the chopping block. Not to mention the entire country, should the Obama-SEIU Democrats continue on their course of fiscal hara-kari.


Linked by: Legal Insurrection. Thanks! Related: Aren't public sector unions cool? Greece about to go KA-F***ING-BOOM and take out the rest of Europe with it.