Obama: federal authorities will use the force of law to fight Arizona's 'misguided efforts' to enforce the law 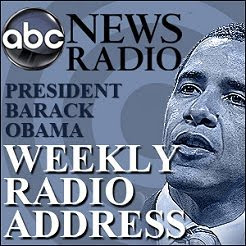 Yesterday, after Arizona's Governor Jan Brewer signed legislation to strengthen border security with Mexico, the President was quick to react. Kind of like how he responded to urgent requests for more troops in Afghanistan.

Obama said that Arizona's efforts to enforce the most basic responsibility of any government -- to secure the safety of its citizens -- was "misguided". And, as you might expect, the President used the moment to throw in an advertisement for more open borders, i.e., "comprehensive immigration reform". Which is kind of like "comprehensive health care reform" and "comprehensive financial reform", only it will bankrupt the country even faster. 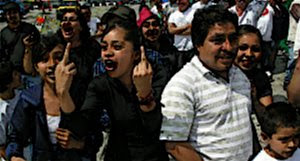 "Our failure to act responsibly at the federal level will only open the door to irresponsibility by others, that includes, for example, recent efforts in Arizona which threaten to undermine basic notions of fairness which we cherish as Americans, as well as the trust between police and their community that is so crucial to keeping us safe."

He added: "If we continue to fail to act at the federal level, we will continue to see misguided efforts opening up around the country."

He said he has instructed U.S. authorities to monitor the state's actions and to "examine the civil rights and other implications" of the legislation."

Governor Brewer's remarks during the signing were concise and on point.

"Respect for the rule of law means respect for every law... People across America are watching Arizona...

We in Arizona have been more than patient waiting for Washington to act... But decades of inaction and misguided policy have created a dangerous and unacceptable situation.

Misguided policies like chain migration, the product of Democrat Lyndon Baines Johnson, which caused legal immigration in this country to quadruple from about 250,000 annually to more than one million a year afterward.

The reality is stark: 83% of homicide warrants in Phoenix, AZ are issued for illegal aliens.

The Democrats' intent is as transparent as it is un-American: turn millions of illegals into citizens to give them the right to vote, with the firm belief that most of them will vote Democrat. Even if it means more murders, more illegal drugs, and more violent crime here in the U.S.

Yet another non-surprise from the White House. Can't let a "few" American lives get in the way of permanent Democrat control. I hope more states follow AZ's lead. I love watching lefty heads 'splode.

In the interest of showing us gun-and-bible-clinging rubes how misguided we are, protesters turned to violence today here in Phoenix. One such rube was attacked and so were the police who were trying to protect him.

"...recent efforts in Arizona which threaten to undermine basic notions of fairness which we cherish as Americans"

B*llsh*t...what he meant was "we need to ram thru amnesty to gain 12 million votes we need to maintain power after the public found out what we really meant by hope and change".

Now you know why Unlicensed Concealed Carry (SB 1108) got passed in AZ.