The Competitive Enterprise Institute (CEI) will release a study tomorrow -- on Tax Day, fittingly -- that calculates just how out of control our authoritarian, centralized federal government has become. CEI calls the "10,000 Commandments of Federal Regulation" a crushing, hidden tax.

Worse still, under the current Democrat leadership, the federal government is poised to become even bigger, more unionized, less accountable and tougher to fire when it fails to deliver. Which is often.

Federal regulations cost a whopping $1.187 trillion last year in compliance burdens on Americans. That’s the finding of a new report, Ten Thousand Commandments: An Annual Snapshot of the Federal Regulatory State, from the Competitive Enterprise Institute that examines the costs imposed by federal regulations.

...The costs of federal regulations often exceed the benefits, yet receive little official scrutiny from Congress. The report urges Congress to step up and take responsibility as lawmakers to review and roll back economically harmful regulations. “Rolling back regulations would constitute the deregulatory stimulus that the U.S. economy needs,” said Crews... Among the report’s findings: 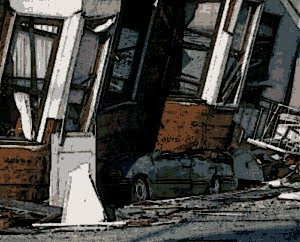 • 3,503 new regulations took effect last year. The burden of government is heavier than ever.
• How much does government cost? Government is spending $3.518 trillion of our money and imposing another $1.187 trillion dollars in the form of regulatory compliance costs.
• How much of our economic output should be eaten by regulatory costs? Regulatory costs now absorb 8.3 percent of the U.S. gross domestic product.
• What's the federal government's total share of the economy? Regulations + spending combined puts the federal government's share of the economy at over 30 percent.
• Which do you think costs us more: individual income tax or regulations? Regulations cost more than the income tax!
• New rules that cost at least $100 million increased by 13 percent between 2007 and 2008.

The report urges reforms to make the regulatory costs more transparent and accountable to the people, including annual “report cards” on regulatory costs and benefits, and congressional votes on significant agency rules before they become binding.

Not to mention implementation of The Fair Tax, a pro-growth national sales tax that would supercharge the economy and liberate private enterprise.

Which is why Democrats oppose it.

Consider: regulations cost the real economy -- the private sector -- $1.2 trillion that would otherwise be spent on hiring, innovation, research, investment, capital equipment, and the like.