Shockingly, one of McClatchy's professional dimwits keeps banging the race card drum, given his complete inability to rationally debate policy positions. Like whether one political party is ignoring the Constitution, for example. 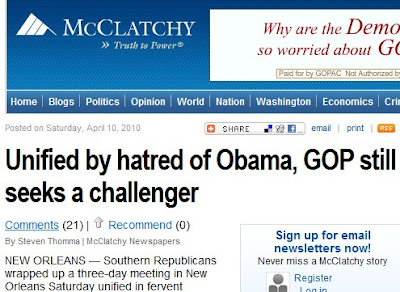 Thought experiment: imagine the headline, circa 2002, that reads Unified by hatred of Bush, Moonbats seek challenger.

I'll leave you with this. The stock chart of McClatchy (MNI).

Memo to the Sharpton League of Hatemongers: we hate your policies. Not because of your race. Because of your stupidity. We hate Marxism. And Marxism is the doctrine of the stupid.

How about Obamunism and Obamumist as well!

I know we sound like "yahoos" according to the "intelligentsia", but Marxism it is.

Government planning, allocation and the codification of the limitation of rights.