When it comes to the pinnacle of dimwitted commentary, the crack journalist named Matthew Yglesias is the undisputed champ*. His latest brainstorm is a doozy as it involves printing lots and lots of money, Weimar Republic-style, which he believes will -- yes, he actually says it -- stimulate the economy.

The trouble in Europe seems to be getting worse, with debt fears spreading somewhat beyond even Spain to Belgium and Italy.

This is something people need to keep in mind when they think about QE2 and the fact that the real problem with current monetary policy is that it’s not loose enough. One thing you’re seeing as all this plays out in Europe is that the Euro is declining in value relative to the dollar. The dollar could go up for two kinds of reasons. One would be that foreigners are increasing their demand for US-made goods and services. They could be saying “I don’t want these Italian financial assets, I’m going to go buy a Boeing jet.” But obviously that’s not what’s happening here. Instead people are concerned about the increasingly rickety-looking European monetary system and want to get their hands on dollars as such. 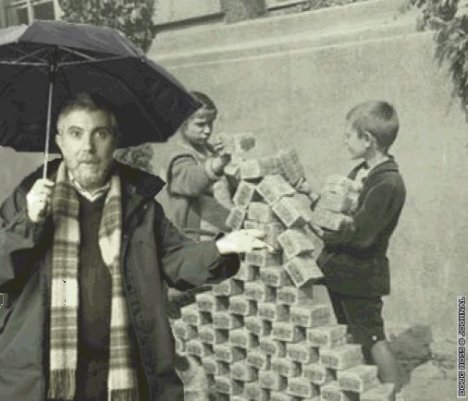 The right response to this is for the Fed to be doing monetary stimulus—printing more money. This can take a number of forms. Buying longer-dated Treasuries seems to be what the FOMC is most comfortable with, but in a lot of ways I think it would be better to just create the money and send it to people...

...There are some questions about exactly how you would organize such a “helicopter drop” but I’m confident it could be worked out. And working those problems out would, among other things, have the advantage of improving the politics of monetary stimulus. Cut the banks out of the transmission mechanism and illustrate the fact that the point is to increase the amount of money that people have.

Terrifying: this is actually considered informed commentary among the Democrat intelligentsia (oxymoron alert).

And they say Sarah Palin is dumb? But I digress.

The club of numbskulls masquerading as Democrat commentators would do well to read Gonzola Lira's Hyperinflation, Part II: What It Will Look Like, authored by a man who lived through the Chile's money-printing nightmare.

During the period 1970–’73, Chile experienced hyperinflation, brought about by the failed and corrupt policies of Salvador Allende and his Popular Unity Government... In 1970, Salvador Allende was elected president by roughly a third of the population. The other two-thirds voted for the centrist Christian Democrat candidate, or for the center-right candidate in roughly equal measure. Allende’s election was a fluke. 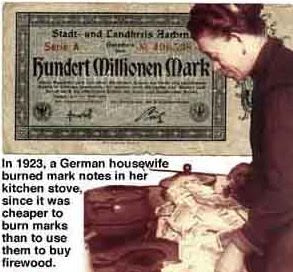 He wasn’t a centrist, no matter what the current hagiography might claim: Allende was a hard-core Socialist... Land was expropriated—often by force—and given to the workers. Companies and mines were also nationalized, and also given to the workers. Of course, the farms, companies and mines which were stripped from their owners weren’t inefficient or ineptly run—on the contrary, Allende and his Unidad Popular thugs stole farms, companies and mines from precisely the “blood-thirsty Capitalists” who best treated their workers, and who were the most fair towards them.

...One of the key policy initiative Allende carried out was wage and price controls. In order to appease and co-opt the workers, Allende’s regime simultaneously froze prices of basic goods and services, and augmented wages by decree.

At first, this measure worked like a charm: Workers had more money, but goods and services still had the same old low prices. So workers were happy with Allende: They went on a shopping spree—and rapidly emptied stores and warehouses of consumer goods and basic products. Allende and the UP Government then claimed it was right-wing, anti-Revolutionary “acaparadores”—hoarders—who were keeping consumer goods from the workers. Right.

Meanwhile, private companies—forced to raise worker wages while maintaining their same price structures—quickly went bankrupt: So then, of course, they were taken over by the Allende government, “in the name of the people”. Key industries were put on the State dole, as it were, and made to continue their operations at a loss, so as to satisfy internal demand. If there was a cash shortfall, the Allende government would simply print more escudos and give them to the now State-controlled companies, which would then pay the workers.

This is how hyperinflation started in Chile. Workers had plenty of cash in hand—but it was useless, because there were no goods to buy...

And please -- please -- don't ruminate on the fact that President Obama appears to see himself as an Allende-like figure. It's terrifying enough to know that the World's Dumbest Blogger™ actually has mucho credibility among influential Democrats.


* This is not meant in any way to impugn the dimwit pothead known as Andrew Sullivan who recently took time away from investigating Sarah Palin's vulva to use the novel word "dickishness" in his latest Pulitzer Prize-winning blog post. This year Sullivan is running a close second to Yglesias in TIQ (total ignorance quotient) but has yet to beat the master. And no, that wasn't a double entendre. At least, not an intentional one.

The Democratic intelligentsia [oxymoron alert] are beginning a high-pitched whine that Randy Andy the Sodhole actually breaks glassware and crockery with its intensity. He appears to believe that the GOP is 'dickish,' [Jon Stewart used the same word tonight in his increasingly feckless and second-rate monologue] because it dares to oppose the worst bill ever foisted on the American people with 2600 pages and zero hours of committee time nor debate. The Dems are now trying to eliminate the filibuster in the Senate after whining for years that the GOP was going to do so. When will Yglesias and Sullivan link arms in a master plan to sink the American Dream for once and for all, with Paul Krugman as economic advisor to closely monitor and counsel concerning next steps?

reminds me of when my kids, during that brief in-between age when they've become aware of checks, but still lack understanding the concept.

"just write a check, mom!" he/she would suggest/demand after i would say "no, we can't afford it."