The Congressional Budget Office (CBO) warned yesterday that a recession is "imminent" given the fact that the do-nothing Senate and the President have refused to pass a budget for over 1,200 days; have failed to address imminent tax hikes on America's greatest job creation engine (small businesses); and continue to blitzkrieg the balance sheet of the federal government with unprecedented deficit spending.

We are facing the largest tax increase in history—Taxmageddon, scheduled to take effect January 1—and what experts are calling a “fiscal cliff” of sharp and unforgiving budget changes that will send the country spiraling downward. Congress and the President have the power to prevent this, and when the August congressional recess is over, that is exactly what they should do.

In its new report, the CBO said that if Congress does not act, it’s not economic growth we should be worried about, because the economy will actually shrink next year. It will shrink by 0.5 percent, and the unemployment rate will spike to 9.1 percent. 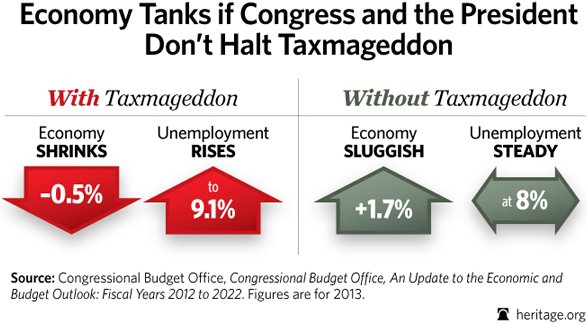 In the middle of this fiscal disaster, the government has no budget. That’s right—Congress has abdicated its responsibility for producing a budget for the country. The Senate failed to produce a budget for the third year in a row. Congressional leaders keep passing temporary stopgap bills to continue funding government operations, but this is unacceptable. They have to take this seriously. Perhaps the CBO’s dire warnings will give them the sense of urgency they are missing.

I wouldn't bet five cents on the Democrats passing a budget this year. Never happen, not just before an election when their bloated Stimulus spending and failed crony green jobs programs have failed miserably and left the country on the edge of a fiscal abyss.

The only real quibble I have with the CBO report is the assertion we would "return" to a recession when we've never really left the original Obama repression of 2009.

Sure, recession is imminent, the economy is stagnant, debt is out of control, ObamaCare will bankrupt the (already bankrupt) country, prices for everything are skyrocketing... but, those are trivial compared to the REAL issues Democrats want to focus on: Romney's Tax Returns!

(I've got that bad feeling that if a large number of voters are more focused on tax returns, reality TV, and facebook than on real issues, America is already doomed.)

In the scenario mentioned in the article, which predicts a -0.5% growth in GDP for 2013, it also predicts GDP will grow an average of 4.2% from 2014 to 2017. IMO calling -0.5% in 2013 a deep recession is not even a stretch, its downright disingenuous. It also doesn't mention the significant reduction in federal deficit that this scenario predicts.

Meanwhile the other scenario they examine, which does not cause short term recession, causes federal deficits to continue at their current rate which will most certainly cripple the economy down the road.

This article appear to be trying to combine the short term recession predicted by the first scenario with the continued crippling deficits of the second scenario, when they are in fact two separate things.

I think the discussion intelligent people should be having about this is whether in the first scenario the price to pay (short term recession, increased taxes, reduced federal spending) is worth it in order to reign in the federal deficit. Or whether the short term benefits to the economy of maintaining spending and tax rates outweighs the long term deficit problems it perpetuates.