But remember, they're doing it for the children: 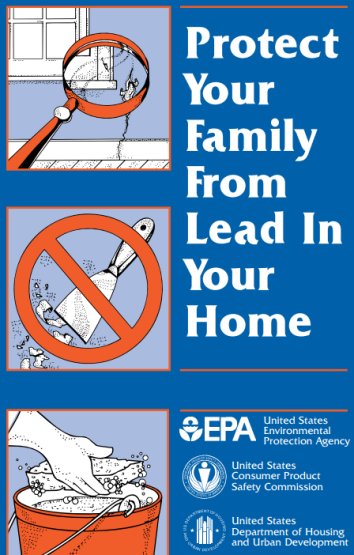 “Thinking of renting or selling a home or apartment?” asks the Environmental Protection Agency. “Make sure you disclose its lead-based paint history. Mr. Wolfe Landau did not and it cost him a $20,000 fine.”

Landau is one of the many landlords and realtors fined by the EPA for failing to provide an “EPA-approved” pamphlet to tenants seeking to rent or buy a house built before 1978... for the EPA, the non-compliance business is booming.

Juan Hernandez of Bridgeport, Conn., faces seven “Level 1” violations for failing to provide seven tenants with a copy of the “Protect Your Family From Lead In Your Home” pamphlet... The EPA filed a complaint against Hernandez on March 27, detailing notifying him that the agency plans to collect $49,980 from him, which works out to $7,140 for each pamphlet he failed to distribute...

...Hernandez’s total fine for other disclosure violations, such as supplying the property’s lead history and a “Lead Warning Statement,” reached $127,150, payable to the "Treasurer of the United States of America."

The EPA says the penalties are justified because lead exposure – a concern when the paint is flaking -- can be hazardous to young children and can lead to damage to the brain and nervous system. Thus the agency requires landlords to provide information about the risks involved.

The pamphlet offers tips to “protect your family,” such as keep play areas clean, keep children from chewing window sills or other painted surfaces, and clean up paint chips immediately.

Available in six different languages, including Spanish, Vietnamese, Russian, Arabic and Somali, the pamphlet is “printed with vegetable oil-based inks on recyclable paper,” it states.

For those familiar with the story of the involvement of Barack Obama and Valerie Jarrett with the Grove Parc housing debacle, this news should prove especially ironic. After all, Jarrett collected millions even as the housing development she ran was declared "uninhabitable" by federal inspectors and eventually condemned. Lead paint and all.

Jarrett would have made millions if the Chicago Olympic bid had succeeded--Grove Parc was to be the site of the new stadium. Wasn't that a coinky????

Shut down the EPA! If for no other reason than to get rid of the fanatics in charge this agency needs to be disbanded.