He didn't even take the time to sign each letter.

On August 6, 2011, 30 US service members were killed when a CH-47 Chinook helicopter they were being transported in crashed in Wardak province, Afghanistan. It was the deadliest single loss for U.S. forces in the decade-long war in Afghanistan. 17 members of the elite Navy SEALs were killed in the crash.

Yesterday, Karen and Billy Vaughn, parents of Aaron Carson Vaughn, spoke at the Defending the Defenders forum sponsored by the Tea Party Patriots outside the RNC Convention in Tampa. Karen brought a copy of the form letter they were sent following their son’s death.

It’s a form letter... signed by an electric pen. 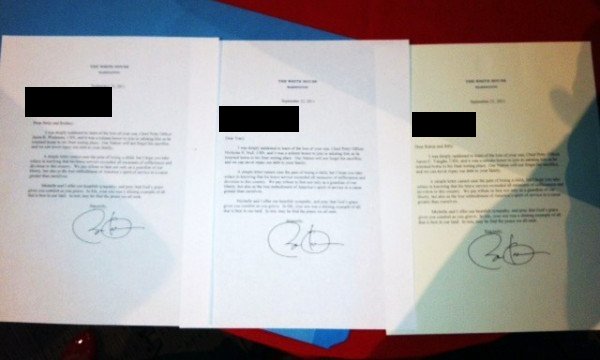 That’s not all... Karen Vaughn reached out to the parents of the other SEALs killed in that crash.

Their letters were all the same. Form letters – signed by an electric pen.

Apparently, Obama was too busy campaigning, golfing and fundraising to sign a few letters of condolence. 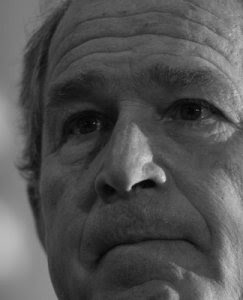 ...sent personal letters to the families of every one of the more than 4,000 troops who have died in the two wars, an enormous personal effort that consumed hours of his time and escaped public notice.

The task, along with meeting family members of troops killed in action, has been so wrenching – balancing the anger, grief and pride of families coping with the loss symbolized by a flag-draped coffin – that the president often leaned on his wife, Laura, for emotional support...

Mr. Bush also has met privately with more than 500 families of troops killed in action and with more than 950 wounded veterans, according to White House spokesman Carlton Carroll. Many of those meetings were outside the presence of the news media at the White House or at private sessions during official travel stops, officials said. 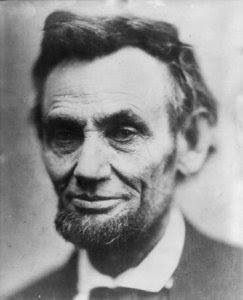 I have been shown in the files of the War Department a statement of the Adjutant General of Massachusetts that you are the mother of five sons who have died gloriously on the field of battle. I feel how weak and fruitless must be any word of mine which should attempt to beguile you from the grief of a loss so overwhelming.

But I cannot refrain from tendering you the consolation that may be found in the thanks of the Republic they died to save. I pray that our Heavenly Father may assuage the anguish of your bereavement, and leave you only the cherished memory of the loved and lost, and the solemn pride that must be yours to have laid so costly a sacrifice upon the altar of freedom.

Yours, very sincerely and respectfully,

I don't have the vocabulary to express my level of disgust with this president's brand of lackadaisical, "lead from behind" behavior. America deserves better. And, God willing, we'll get it in November.

WOW !!
And you'd think that NObama couldn't get any less dignified.

W should have send personal letter of condolence. He send those soldiers to die on a personal vendetta! I hope the guilt still gnaws at him!
Obama - shame! Take the time!

The signatures are different you dullards, but nice try blurring the picture. Shameless liars.

so now you're calling the SEALs' parents liars?

He is a disgusting excuse for a human being.

He is a disgusting excuse for a human being.

Sorry, but the signatures sure look to be identical (as are the form letters).

But maybe he gave the Presidential order for his secretary to push the button to start the electronic pen.

"Sorry, but the signatures sure look to be identical"

Sorry, but you're blind.

@NotLikely - do you know what an auto-pen is?

Why did it take SEVEN WEEKS to send these letters out?

Doug, I have an ancient book of poetry by the likes of Longfellow and Wordsworth. The editor of that anthology saw fit to include the letter from Mr. Lincoln to Mrs. Bixby, noting in his remarks: "On the walls of Brasenose College, Oxford University, England, this letter of the "rail-splitter" President hangs as a model of purest English, rarely, if ever, surpassed."

The letter, incidentally, was written entirely by Lincoln's own hand.

If Bush didn't illegally invade Iraq, these letters would be unnecessary to begin with.