The unvarnished idiocy of the green agenda in a single picture

Together, the 48 contiguous states are comprised of 2,959,064 square miles (which excludes bodies of water).

There are also about 300 million citizens living in the United States. If you had everyone in the U.S. stand next to each other -- let's say they each have their own square yard to stand in -- how much of the contiguous land would be filled?

Answer: about 96 square miles or the size of Plymouth, Massachusetts. 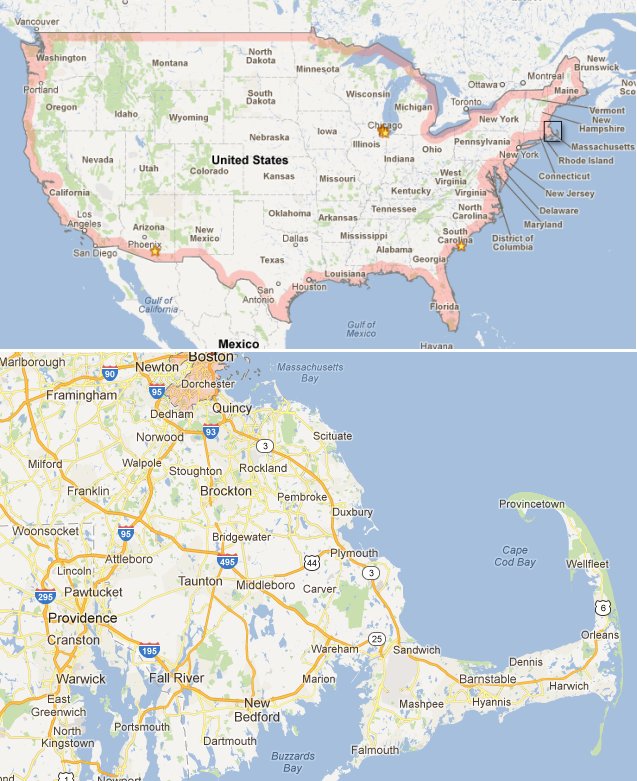 This estimate ignores, of course, the immense land mass known as Alaska as well as Hawaii. Humans would be even less consequential if we took those areas into account.

Each time you fly over the United States, remember how inconsequential humans really are.

Humans represent the metaphorical gnat on an elephant's posterior. And human activities have about as much to do with carbon dioxide, photosynthesis and the rest of the earth's organic processes as Al Gore had to do with the invention of the Internet. Which is to say: none.

Thanks - there I go trusting the intertubes again... will adjust.

And if we take the current world population of 7.035 and divide by this number, we'd get an area of 2,271 sq miles needed to contain it

But if you all those people in Plymouth, North America would flip over.

Now do a calculation for that amount of surface area required to provide photovoltaic electricity to support all 300 million people.
This article says about 4,883 sq miles:
http://www.salon.com/2008/04/07/ask_pablo_solar/
Since it is from Salon magazine I suspect that number is on the optimistic side, so its probably more like 6000 square miles. This is about the surface area of Connecticut. The article says it would take 100 years to produce that many solar panels. I suspect longer since the "greenies" would then start screaming about a silicon (sand) shortage...

The beauty and simplicity of your reasoning here demonstrates a clarity of thought liberals usually just can't understand. Your conclusion that the impact of mankind on the earth is likely to be trivial because of the relative difference in mass and volume of the species vs. our host planet is a principle with nearly universal applications.

Consider this application. There are nearly 75 trillion cells in the average human body. Considering that vast number, a handful or so of pesky cancer cells in the lungs or pancreas couldn't possibly have much of an impact, now, could they?

great job on completely missing the point. it's not about personal space STUPID. It's about how much viable land is used to SUSTAIN each individual. People in the US, who eat a "western" diet, i.e., a diet comprised mainly of processed foods that are calorie rich, heavy on beef, etc. Cornell University's study (http://www.jayhanson.us/page40.htm)found that you need at LEAST 1.2 acres per person to maintain our diet; in actuality we use 1.8 acres per person. The entire planet only has 7.68 billion acres of arable land - so GOOD FUCKING LUCK WITH YOUR FAILED MATH. Typical fucking conservative.

Tell me, Dr. Einstein: how many humans' emissions equal one major volcanic eruption such as the one that interrupted air travel throughout Europe a few years back?

Don't worry: I'll wait here while you do the math.

You're logic is flawed, probably because of your biased opinions and being swayed by your political or religious beliefs. You leave a few facts out of your analysis, most like to dramatize your point and make the other side seem silly in comparison. In actuality your "single picture" makes your point look idiotic. The fact that every person in the US can stand in Plymouth, MA without does not acknowledge these facts:
1 - Who can live/work/survive in a one square yard space?
2 - What impact does our food, clothing, electricity, water, sewage, housing, heating, cooling, roads, bridges, hospitals, schools, factories, cars, trucks, factories - basically our everyday life, our economy, our way of living - have on our planet? Your analysis does not address this question.
3 - Yes the Earth is a big place, but did you know that only 29.2% of the surface of the Earth is land. To break down the area of the earth that is land gives you these numbers: 1% is habitable by humans, 40% is wilderness, 14% is uninhabitable desert, 15% arid, 9% Antarctica, and 22% is agricultural. You don't seem to consider any impact our existence has on our planet.
Your analogy of being able to fit every American in 96 square miles does make for an interesting picture, but has no direct correlation to the issues of global warming or over population. You have to take into consideration a person’s impact on the planet and the land that is actually available to live and use for agricultural purposes, as well as how much natural forest we destroy for expansion. You do not even address the resources needed to sustain our civilization.
Saying that you can fit every American in 96 square miles makes me wonder something else. Let’s say you could fit 200 cockroaches in a shoebox. If they were let loose in your home (which is much, much bigger than your shoebox I would assume) would you not feel they were creating an impact? I mean after all, they are not really taking up that much space.

this will be a terrific exercise for my primary school class to work through this week. classic errors in maths, geography (for them foreign geography at that),and basic flaws in logic. good revision for a 3rd grader. terrific. thanks

As a biologist, I am struck by the absence of the concept of "carrying capacity" in your article. In every real world example of overpopulation that led to a serious population crash, the amount of resources used by various organisms was the principle issue. You see this with white-tailed deer on the East Coast. Healthy populations are under 50 per square mile, even though you can pack millions into square mile using your technique. What I would like to see you address are the issues of human carrying capacity. How much acreage each human needs to grow food, materials for housing, clothing, etc. That would be more useful.

p.s. Vint Cerf, the father of the Internet, is very grateful and appreciative for what Al Gore did to help furthering the development of the internet. http://web.archive.org/web/20000125065813/http://www.mids.org/mn/904/vcerf.html