Can you imagine what vintage media would say if Joe Biden was a Republican? Never mind. He'd have been run out of politics after his first few months in City Council, or wherever the hell he came from.

Keith Koffler offers us the quintessential summary of Biden's idiocy wrapped into a nice little package with a bow on top. 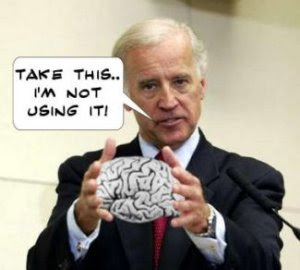 Biden this week suggested that Gov. Mitt Romney would put African Americans back chains and, in a separate appearance, indicated that we are all still living in the 20th century. The statements are just the latest in a series of mistakes – assuming the comment about African Americans was unscripted – in the past few months that have raised concerns about Biden.

Most famously, he blurted out on Meet the Press that he favored gay marriage, forcing President Obama to hastily emerge with his own statement of support.

He called Obama “President Clinton,” called Romney “President Romney,” suggested the Irish drink too much, crossed himself in front of a meeting of over 1,000 conservative rabbis, and paid a visit to Florida’s “Evergators,” as he put it.

Biden is to moronic statements what Michael Jordan is to basketball.

at 6:24 PM
Email ThisBlogThis!Share to TwitterShare to FacebookShare to Pinterest
Labels: Biden, Democrats