Photo o' the Day: Union Members March Against the Environmental Radicals and their Democrat Sycophants

Somehow I don't think you'll be seeing this particular photo on the front page of The New York Times. 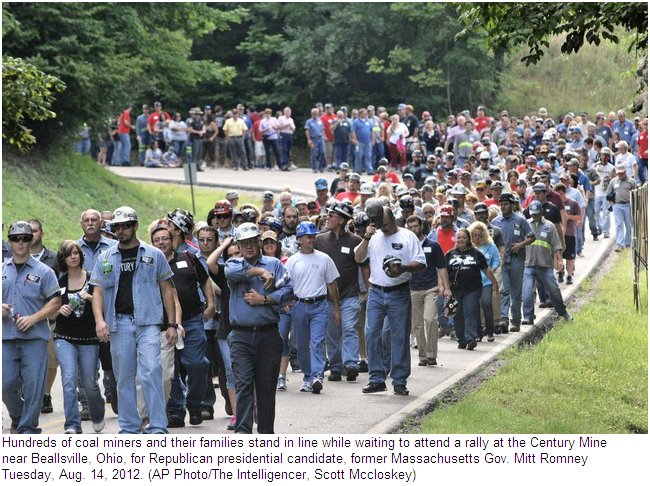 Seventy-plus men walked out of the ground, overalls and hardhats covered in coal dust, and onto the risers of a stage built for a Mitt Romney speech.

To onlookers, mostly press and staffers, the image was stunning.

To the 2,600 family members gathered in the gravel parking lot or under tents, eating hot dogs and drinking pop, it was a moment of immense pride.

This is what we do, said Tim Wiles: “We make things. We provide energy for the state, food for our families, and businesses are sustained around the county because they make money from us.”

The 54-year-old miner added, after listening to Romney: “This election is his and Paul Ryan’s for the taking. They need to be bold and remind people of what we stand for, that we are the backbone of this country.”

The members of the United Mine Workers -- and just about every other private sector union in America -- are being sold down the river by Barack Obama and the Democrat Party. So beholden are Democrats to the environmental Statists that they would rather entire counties in California go without water, that America's electric grid struggle to survive without clean coal, and that all of the U.S. can go without oil from the Keystone XL pipeline.

This costs the union members a very important -- as Joe Biden might say -- three letter word: J-O-B-S. And methinks the results in November will be stunning.

I think they will be too!

Deborah Leigh said...Hey Joe! It's C-O-A-L. Now that the miners have shown courage and integrity, let's see if any other unions follow suit. Same challenge with Newsweek.