X-51A WaveRider: New York to London in an hour?

It's not a Star Trek transporter, but it's probably the the closest we'll come to seeing one in this, the 20th century*. 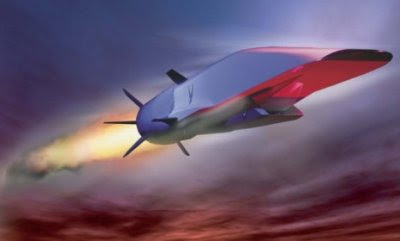 A futuristic new hypersonic Air Force jet that promises transatlantic flights from New York to London in about an hour was tested on Tuesday over the Pacific. The X-51A WaveRider jet can go five times faster than the speed of sound without a pilot, and, in theory, could shorten the amount of time travelers have to spend airborne...

...The WaveRider — which is small, wingless, and resembles a shark — uses a special "scramjet" engine — shorthand for "supersonic combustion ramjet," says Daniel Lametti at Slate — to reach speeds of up to 4,500 mph. A standard Boeing 787, for example, tops out at 647 mph. The jet works by gobbling fast-moving air into an engine, where it mixes with fuel and is then ignited to produce thrust. Ordinary planes, on the other hand, require the help of turbines to achieve the same effect. As a result, the scramjet is able to reach "dazzling speeds" with no moving parts...

[The downsides?] For starters the jet can't start from a standstill, and therefore needs to be dropped from another plane to become airborne. "Since forward motion is what pushes air into the engine, the plane must be brought up to speed before ignition," says Slate's Lametti. That also means the WaveRider is incredibly difficult to start up: One military report likens producing thrust on the scramjet to "lighting a match in a hurricane and keeping it burning."

Okay, I'll ask the obvious question: why can't it be equipped with a traditional jet engine to get to sufficient speed on its own?


* According to Joe Biden.

...because the shock-wave entering the engine would destroy the highly precise turbine blades. SR71 had movable cones guarding the engine to place the shock-wave ahead of the blades. Short of completely covering up the nacelle and shutting the jet down (with the drag & deadweight of the external jet engine), there is really no way to safeguard the jet.

It actually is dropped from a B-52 and then accellerated with a rocket stage that drops off after burnout. So it has to be going much faster than even an sr-71 could accellerate it to before it lights up.