Nothing says "Arab Spring" like a crucifixion or two, eh, Hillary?

The Arab Spring takeover of Egypt by the Muslim Brotherhood has run amok, with reports from several different media agencies that the radical Muslims have begun crucifying opponents of newly installed President Mohammed Morsi. 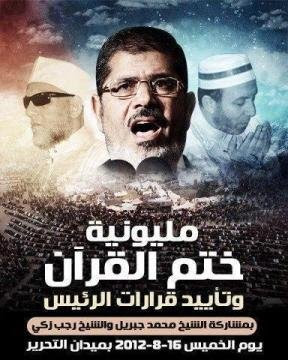 Middle East media confirm that during a recent rampage, Muslim Brotherhood operatives, “crucified those opposing Egyptian President Muhammad Morsi naked on trees in front of the presidential palace while abusing others.”

Raymond Ibrahim, a fellow with the Middle East Forum and the Investigative Project on Terrorism, said the crucifixions are the product of who the Middle Eastern media call “partisans.” ...Ibrahim also says the victims can be anyone, including Egyptians and Christians.

Center for Security Policy Senior Fellow Clare Lopez cited chapter and verse from the Quran to explain that crucifixions are not simply normal for Islam; they’re demanded.

“Crucifixion is a hadd punishment, stipulated in the Quran, Sura 5:33, and therefore an obligatory part of Shariah,” Lopez said. “It’s been a traditional punishment within Islam since the beginning, even though it’s not exclusively Islamic. The Romans used it too.

...Lopez includes a warning for Egypt’s Christians and compares the coming treatment of the Christians to the Jews in Germany... “The Copts must get out of Egypt as soon as possible – for the many millions who will not be able to get out, I expect things will continue to deteriorate – just as they did for Germany’s and Europe’s Jews from the 1930s onward,” Lopez said.

Suffice it to say that this -- along with a nuclear Iran -- is the price of President Obama's infamous "leading from behind" doctrine.

and these are the moderates right?

I've been searching the interwebs for several hours now and have found nothing to corroborate the reports of recent crucifixions in Egypt. All the the stories are referencing each other as confirming the original which has nothing but accusations, and a few links to an Egyptian PM who introduced a bill to make crucifixion a lawful punishment beyond a Koranic requirement.

Although crucifixion is totally believable of the people being accused, I want to see some actual proof like photos or video, not some opponent with an axe to grind saying 'believe me, I saw it with my own eyes'. Egypt and Islam are cultures with a rich story telling tradition.

Oh, it's all OK. They got the Fatwa first. So all nice & legal to kill any anti-Morsi folks. http://www.jihadwatch.org/2012/08/egypt-muslim-cleric-issues-fatwa-permitting-the-murder-of-demonstrators-against-muslim-brotherhood-p.html