Please tell me you're not surprised by this outrageous development.

The leaders of [the “Jummah at the DNC”] event – Jibril Hough and Imam Siraj Wahhaj as advertised are no moderates. They are radicals. These individuals embrace Islamist supremacy and have demonstrated support for radical ideologies... M. Zuhdi Jasser M.D., Founder and President of the American Islamic Forum for Democracy [describes] Siraj Wahhaj [as someone] "who I saw with my own eyes in 1995 seditiously say it his duty and our duty as Muslims to replace the US Constitution with the Quran"... 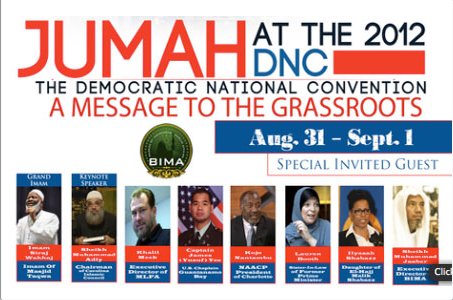 ...Imam Siraj Wahhaj is imam of a mosque in Brooklyn, New York, the leader of The Muslim Alliance in North America, a member of CAIR, and an unindicted co-conspirator in the 1993 World Trade Center bombing... 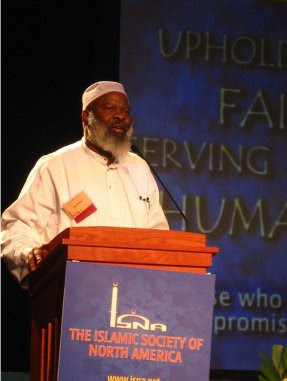 ...As a character witness for Omar Abdel Rahman (the Blind Sheik) who was convicted of plotting to blow up the World Trade Center and other New York City landmarks, Wahhaj described him as a “respected scholar,” and “bold, as a strong preacher of Islam.”

...Wahhaj is also a Board of Trustee member of the North American Imams Federation (NAIF)(who’s website currently features an anti-Jewish, anti-black rant), a Muslim Brotherhood front organization, who (coincidentally) held a conference in Charlotte last year on Islamophobia...

...Like Hough, Wahhaj is also connected to NAIT by way of his membership in the Islamic Society of North America(ISNA), which was also found by the government to be a front for HAMAS and the Muslim Brotherhood. While Hough has been careful to play politics in Charlotte, Wahhaj has not hidden his hatred for America. He is quoted as calling America, “a garbage can… filthy, filthy and sick.”

...As an imam, he has stated, “Where ever you came from, you came to America. And you came for one reason – for one reason only- to establish Allah’s deen (a complete way of life).” He believes that the only reason to get involved in politics is to use it as a weapon in the cause of Islam. By his own admission, the question of why Wahhaj would be interested in hosting events at the DNC is obvious.

All of these organizations are connected in one way or another to the Muslim Brotherhood, the new leaders of Egypt and proud heirs to the legacy of the Third Reich.

"Oh, is this the DNC convention? I was looking for the Death to America by Allah's Command conference."