The indefatigable Tyler Durden notes a curious admission that I can guaran-damn-tee you won't be reading about in the weekend funny papers:

While one may wonder about the implications of the just announced "accelerated wind-down" of the GSEs, predicated in no small part by the surge in animosity between Tim Geithner and the FHFA's Ed DeMarco, there is one aspect of the announcement that is completely and utterly unambigious: as part of its justification to demand faster liquidation of Fannie and Freddie's "investment portfolio" Tim Geithner gave the following argument:

This will help achieve several important objectives, including... Ending the circular practice of the Treasury advancing funds to the GSEs simply to pay dividends back to Treasury 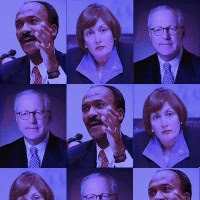 In other words not some fringe blog, not some "partisan" media outlet, not some morally conflicted whistleblowing former employee seeking immunity, but the US Trasury itself just admitted it had been engaged in circular check kiting scheme, which essentially has all the components of a Ponzi scheme in it, ever since the nationalization (about which there is no now doubt and which means the GSE's $6 trillion in debt is now fully on the Treasury's balance sheet) of Fannie and Freddie in 2008.

The ludicrous hacks Jim Johnson, Jamie Gorelick and Franklin Raines -- all Democrats, all Clinton sycophants, and all of whom raped Fannie Mae like a Doberman let loose in a Toy Poodle pet shop -- should be serving time in federal lockup. Between them and a couple of other execs, they were somehow able to pull $200 million in compensation out of FNM just before the entire system imploded.

The history books, if they are written with a modicum of the truth, will remember these Democrat henchmen as the linchpins of the housing meltdown.

@Joan - here's the storyboard version of that great clip: