Joe Biden versus... Himself

At least they didn't catch him with a blow-up doll. Yet.

Joe Biden, Intellect of the Democratic Party, Just a Grin With a Body Behind It, Goes Off-Script Again Himself: Kisses Female Supporter Full On The Lips 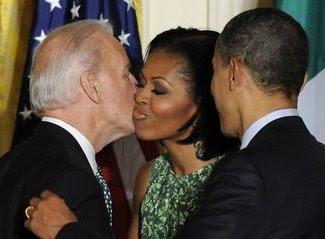 He really thinks he's charming. And I guess he is... to stupid people.

I've made this comparison before, but both Joe Biden and Bill O'Reilly must have been told by Irish grandmothers a whole bunch of times that they had the Gift of the Blarney...

But Joe Biden is just.... I don't know what to say. Guy's giving full-mouth smackers to old ladies on the campaign trail.

One woman, who the pool later identified as Bev Kalmer, of Poland, Ohio, told the VP: "Welcome to Ohio." His response: "I've been waitin' all day to be here."

She said "You gotta keep the chair" to him -- a reference to Clint Eastwood's speech last night at the RNC -- and he gave her a kiss right on the lips. She swooned. Asked if she wants Biden to run for president in 2016, she told the pool: "I don't know. We've got to keep the chair." She paused. "You got that? The invisible chair."

Ouch. Here's some ice to put on that, Joe.

My guess is the reports are true: Hillary turned down the VP slot a few weeks ago.

We already know that she's skipping the Democrat National Convention. And she may be plotting a 2016 presidential run against President Romney.

I say President Romney, because no Democrat would bother mounting a serious run after four more years of Obama.


Update: The gift that keeps on giving:

Approaching a table of men he knew to be Greek, the VP said, “I’m Joe Bidenopoulos.”

“Ask George,” he said – unclear who George was, maybe someone at the table --“who’s the most Greek Irishman he’s ever known.” Sounded like Biden was suggesting he is.

He moved on to a table of three women, sitting down briefly, before moving on to one where two women were sitting.

“Let’s dance,” he said to one, named Jennifer, as she stood up right next to him. They posed for a photo before he turned to her tablemate, who was wearing scrubs, and asked, ‘Are you a nurse?” He then sat down and started speaking to her quietly, presumably about nurses.

at 9:27 PM
Email ThisBlogThis!Share to TwitterShare to FacebookShare to Pinterest
Labels: Biden, Democrats