A series of California cities have declared bankruptcy this year, due primarily to out of control wage and benefits packages negotiated by public sector unions and their Democrat cronies. While San Francisco has thus far avoided insolvency, it's well on the way there as evidenced by its embarrassingly rich pay packages for city workers: 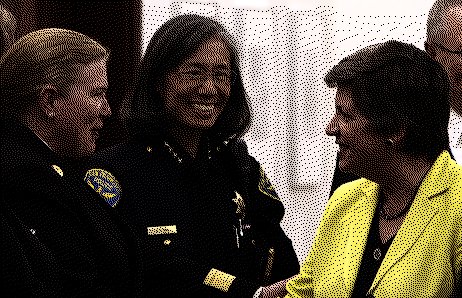 ...Fire Chief Joanne Hayes-White came in second in the city salary sweepstakes at $310,458 - including $17,573 in similar pay premiums for education and training.
Jennifer Johnston, spokeswoman for the Human Resources agency, said the city has considered eliminating premium pay for higher-ups, but that without it, the bosses wouldn't be making much more than the rank-and-file.

In all, a record 401 San Francisco city workers made more than $200,000 in the past fiscal year, with overtime included.

The top earner was Assistant Fire Chief David Franklin, one of six deputies assigned to work 24-hour shifts in firehouses. He pulled down $333,490, including more than $140,000 in overtime and other pay.

...One of the real eye-catchers is the Muni electronics mechanic who ranked fifth in city government in overall pay... The mechanic, Khoa Trinh, who works on buses, light-rail vehicles and trolley cars, was paid a base salary of $106,036 - but he pulled down $163,856 in overtime and $23,478 in other extras, to boost his total earnings to $293,370.

Plenty of Muni brethren joined Trinh atop the money pile. Ten street supervisors and three mechanics earned more than $200,000 apiece last year, and all of them more than doubled their base salaries with overtime.

"It's frustrating as hell," said one Muni higher-up, who asked not to be named because of the sensitivity of the issue. "It's a big black box, and I don't know how to untangle it - and I'm on the inside."

Untangling it will require the heroism of someone like Wisconsin Governor Scott Walker. Someone brave enough to take on the public sector unions and the Democrat government apparatus, who have formed an unholy alliance against their employers, the taxpayers themselves.

And what does a front line cop make??? Right, they are not that important...

wow those are some nice payouts from the city of San Francisco. We tow all around San Francisco if you ever need: http://towing-san-francisco.com/