Seniors are rightfully concerned about the horrific damage that Obamacare does to Medicare.

It turns out that the government's incessant meddling with the student loan business has not only spiked college tuition prices, but those loans are now slamming seniors in addition to kids.

According to government data, compiled by the Treasury Department at the request of SmartMoney.com, the federal government is withholding money from a rapidly growing number of Social Security recipients who have fallen behind on federal student loans. From January through August 6, the government reduced the size of roughly 115,000 retirees’ Social Security checks on those grounds. That’s nearly double the pace of the department’s enforcement in 2011; it’s up from around 60,000 cases in all of 2007 and just 6 cases in 2000. 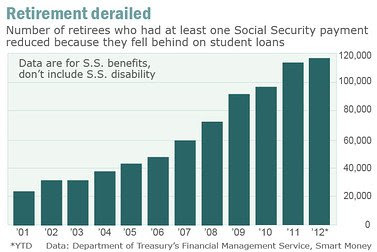 Many of these retirees aren’t even in hock for their own educations. Consumer advocates say that in the majority of the cases they’ve seen, the borrowers went into debt later in life to help defray education costs for their children or other dependents.

...Roughly 2.2 million student-loan debtors were 60 and older during the first quarter of 2012, and nearly 10% of their loans were 90 days or more past due, up from 6% during the first quarter of 2005, according to the Federal Reserve Bank of New York. “It’s really a unique problem we haven’t had to face before, and it’s only going to grow,” said Robert Applebaum, founder of Student Debt Crisis, a nonprofit advocacy group in Staten Island, N.Y.

The threat of Social Security cuts adds to the overall financial woes faced by the aging baby boomer generation. Almost 45% of people aged 48 to 64 won’t save enough money to cover basic needs and uninsured health care costs in retirement, according to the Employee Benefit Research Institute. Experts say reducing Social Security benefits could set them back even more.

...Compared to present-day retirees, younger generations are in deeper debt, which means stories of Social Security garnishment could become more commonplace when they enter retirement. Borrowers in their 20s and 30s owe roughly $600 billion, according to the New York Fed. They’re also leaving college with more debt than their predecessors: 66% graduated this spring with debt, and their student loans averaging $28,720, up from $9,320 in 1993, according to FinAid.org.