Democrat Rep. Gauthier stays in race: He says having sex with 17-year-old boy at interstate rest stop is a "private matter" 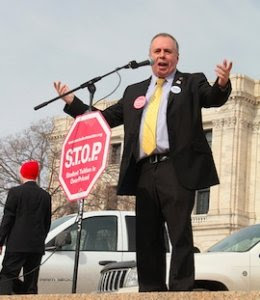 Minnesota’s Kerry Gauthier... a DFL representative, was apprehended at a highway rest stop having oral sex with a seventeen-year-old boy. Gauthier described the incident as a “private matter.”

Gauthier’s fellow Democrats are trying to show him the door; one of them referred to him publicly as a “child molester,” while Governor Mark Dayton said, “I believe he is unfit to serve beyond this term.” The Minneapolis Star Tribune, however, reports that Gauthier says he will run for re-election in November

Is there any possibility he could win in November? One wouldn’t think so, but his Duluth district is heavily Democratic. His campaign will reveal, perhaps, whether Democrats have any standards whatsoever.

John Hinderaker, author of the cited article, should know better.

The party that called a man who drove a woman into a pond and left her to drown "The Lion of the Senate"?

The party that has as its convention keynote speaker this year an impeached, disbarred ex-president who admitted to molesting an intern in the White House and who was accused of rape or molestation by at least three different women?

The party that sent a man to 16 terms in Congress despite the fact that a gay house of prostitution was being run out of his residence?

The party that let a Congressman stay in office even though he admitted to having a sexual relationship with a male, 17 year-old Congressional page?

Somehow I doubt it.

No, all of the media outrage must be reserved for a doofus who said something idiotic, not Ted Kennedy, Bill Clinton, Barney Frank or Gerry Studds, to name but a few.

YOUR LIST OF IMMORAL DEMS IS IMPRESSIVE, BUT REMEMBER: NONE OF THEM SAID MACACCA!

Democrats: The party of rape.

You forgot the party who also lionized a known GRAND WIZARD OF THE KKK.

Any 17 year old boy who decides to have anonymous gay sex, at an interstate truck stop, obviously has mental or emotional problems, and is in need of some serious help.

Any middle-aged man, a complete stranger, who makes a conscious decision to take advantage of that obviously troubled child, by engaging him in sex, should have his ass thrown in jail.

And it ceased to be a "private matter" when this Congressman decided to have sex in a public place.

The Democrats had a Congressman, who went skinny dipping at night, in the dark investigated, but having sex in a busy interstate rest area, with someone who's too young to legally drink is ok?