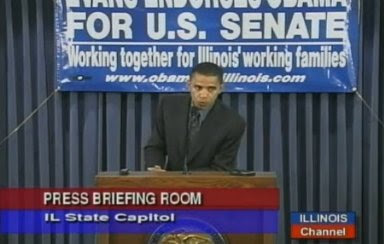 Q: Are you pro-choice?

Obama: I am pro-choice.

Q: In all situations, including [the] late-term thing?

As Jim Hoft observes, "[T]his political position in itself, makes Barack Obama the most radical president in US history. But, don’t expect the media to report on this."

In fact, Barack Obama -- as a state senator -- endorsing fourth trimester abortions, which is to say he explicitly voted on multiple occasions to legally permit a doctor to terminate a baby that had survived an abortion.

So which is more controversial: some crackpot statement by a guy in Missouri or the Obama record of -- not once, but twice -- voting to legalize infanticide?

For you drones reading along -- slowly, to be sure -- that's a rhetorical question.