The United States Postal Service reported a $5.2 billion last quarter and just defaulted on a $5 billion loan payment earlier this month. In addition, the USPS said it will "miss a second $5.6 billion payment due next month as cash runs low."

And it's not just the heavy unionization, unbelievable pensions and health care benefits, the plethora of offices, or the failure to embrace digital technologies.

It's also the superb management! 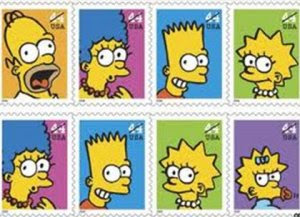 The U.S. Postal Service wasted $1.2 million in printing costs by selling less than a one-third of the 1 billion commemorative stamps of The Simpsons, Bloomberg news reports... The 44-cent "Simpsons" stamps, which sold in 2009 and 2010, came in five designs, featuring Homer, wife Marge, and children Bart, Lisa and baby Maggie.

...One problem, the IG notes, is that the stamps are tied to their 44-cent price, and became unwieldy for customers when the price of mailing a first-class letter went up by a penny. The IG also criticizes the process for deciding how many stamps to print, saying it is too unscientific and dependent upon the experience of one individual, which can lead to "costly miscalculations."

I don't know how you feel, but in my book this management team has bailout written all over them.

And let's look on the bright side: at least they didn't order 1 trillion Simpsons stamps!

at 7:12 PM
Email ThisBlogThis!Share to TwitterShare to FacebookShare to Pinterest

Just out of curiosity, how much of the postal service loss is due to bloated pensions and benefits??


Can't wait until my health care is managed as well as this.