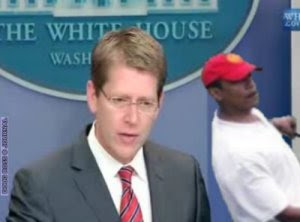 ABC News’s Jake Tapper noticed an interesting trend with President Obama. He hasn’t been around to take any questions from the press lately. In fact, he has evaded the national press corps for more than two months. However, as Tapper noted on his blog today, Obama did have time to talk to ”reporters from People Magazine and Entertainment Tonight.” In addition, “during his three-day Iowa bus tour this week, for example, he conducted three interviews with local radio stations, including a sports talk radio show, and a roundtable discussion with columnists from three Iowa papers, in addition to sitting down with People and Entertainment Tonight. On July 12, he did an interview with Charlie Rose for CBS This Morning.”

Obama’s “last news conference was at the G20 in June, when he answered six questions from three reporters on the European debt crisis, the conflict in Syria, and the notion of politics stopping at the water’s edge. The White House press corps has not formally been given the opportunity to ask questions of the president on U.S. soil since his appearance in the Briefing Room on June 8 (when he said “the private sector is doing fine.)”

That would be a good enough reason for the folks in Team Obama to advise their boss to wimp out on the press, but it’s even more embarrassing when Mitt Romney has been able to appear on CBS twice this week, while Obama seeks to mediscare the senior citizens of Iowa. Tapper noted that, “asked if the president will be holding a full-blown White House press conference any time soon, Press Secretary Jay Carney told reporters Wednesday, ‘I don’t have any scheduling announcements to make about that.’”

Of course not. Given the president's daunting schedule of golf, fundraising, pickup basketball, fundraising, softball interviews, and fundraising, there's simply no time left for the White House Press Corps. Or leadership, for that matter.

lwhat about this little thing called the Afghan war? why was that an issue when Bush was president now it has totally dropped off the msm radar screen even though are casualties are severe.

Nobody is at home in the White House. This ship has no captain.

AND ALL OUR ENEMIES AROUND THE WORLD KNOW IT. (Think about that.)

Which is why I have trouble sleeping at night.