Apparently GM doesn't have enough on its hands with lawsuits for channel-stuffing, 500,000 recalls for, uhm, vehicles that catch fire, the fact that it still owes taxpayers more than $35 billion, its thousands of excess workers around the world, its need for a bigger credit line to pay off its obligations, management turnover or hemorrhaging stock price.

Because now it's resorted to producing ads so misleading that they've been banned.

For carbon-conscious drivers, the advert for an electric car with an impressive 360-mile range seemed too good to be true. 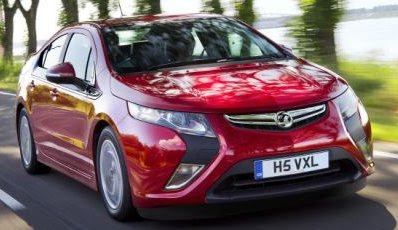 Unfortunately, it appears it was, as the real range of the electric batteries in the Vauxhall Ampera [Ed: the European version of the Chevy Volt] is a rather more modest 50 miles... And to go beyond that, it relies on help from a somewhat less green source – a petrol engine.

...Now the commercial has been banned for misleading motorists who want to do their bit for the environment.

...Vauxhall insisted its claims about the Ampera were genuine and that once in ‘range extender mode’, it can indeed keep going for 360 miles... However, the ‘range extender’ consists of a small petrol engine which switches on once the battery has been exhausted.

...However, in a ruling published today, the Advertising Standards Authority said the car firm should have been more upfront about the use of the petrol engine... The watchdog said: ‘We considered that throughout the ad the emphasis was on the fact that the car was being driven electrically, and that most viewers would not understand that the car was in some circumstances being powered by electricity generated with a petrol engine.

‘Because it did not clearly explain how the vehicle worked in extended range mode, we concluded that the ad was misleading.’

Somehow I don't think we'll be reading this particular story in The New York Times.

Times botched the story, the car is only sold as a Vauxhall in the UK, while on continental Europe it's marketed as an Opel

Ad or not, it still is a phenomenal car and fun to drive.

Like much of what Obama touches, LIES and misinformation surround them.

This blog is more misleading than any of the ads put out by Chevrolet. Everything was true about what they said. Only an idiot would not know that hydrid uses gas some of the time. Still the Volt has a vastly superior design than any other hybrid on the planet. Many hundreds of miles per gallon easily acheived by most drivers