I'd like to say that I'm surprised by this, but that would be a lie.

When I heard Neil Armstrong had passed away, it took me a while to hit me fully. I saw people send messages of remembrance and commemoration, and decided I should do my own, to show how much respect I have for a real American hero:

Neil Armstrong represented American hope, pride and excellence. And he took us to the moon. Godspeed on your last trip through the heavens.

It is nearly literally the least I could do for someone that symbolized American greatness so thoroughly, and in so many aspects.

No, only one person I know of would do that. 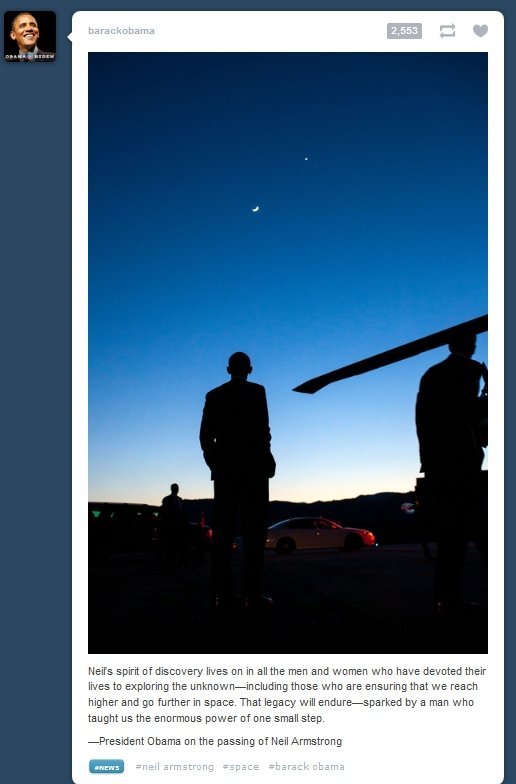 Just add it to the Narcissist-in-Chief's self-aggrandizement file, right after the sections that describe editing presidential biographies and modifying State Department country briefs to include unprecedented references to Dear Leader.

Difficult to tell from this photograph if Obama is baying at the moon or not ;-)

So, the White House couldn't find a more appropriate photo of Neil Armstrong... perhaps, this one of him actually on the moon?!?

New one for the list.
The first president that can identified from behind at night.

Isn't there a saying that goes something like, "The Ears Have It?"

There is nothing this small man won't expropriate for himself. BTW is that a VOLT in the background?

So the man who said that NASA's mission is now Muslim outreach commemorates Neil Armstrong's passing with a picture of himself looking at a crescent moon and star?!

From the same Preezy who rewrote presidential biographies to include himself at every turn.

I am only surprised he didn't photoshop himself on the moon.

He could have at least saluted, instead of just standing there with his hands in his pockets.

h/t Hope And Change Cartoons--I had not noticed.

I'm beginning to think that this guy's ego is reaching the Article 4 of the 25th Amendment levels.

Nothing gets past Stilton!

Dont yall know... Neil Armstrong didnt do that (walk on the moon first), someone else did that for him. Probably the "liar-in chief." himself, Barak Huessan Soetoro.

Really? Obama remembers the passing of one of America's heros by posting a picture of him contemplating a symbol of unity for Muslims!

What a narcissist. Everything has to be about him.

this site sucks ass. all you do is bitch. you aren't that important loser. get over yourself

Get over it, you partisan whiners. It's an image accompanying the President's remarks. God, what flimsy people.

because as everyone knows. Obama played poker on the moon with Neil.

Oh noes,the Fark.com B.H.O. pep squad is here to make their apologetic presence known!Woes unto you who do not bathe thy tongues in the fetid arse of "THE ONE".

O is a supreme egotist - imagine his gall at saluting an American astronaut & imposing his pic - even after the funding for NASA has now gone to promote the Arab's contributions to the world? Such hypocricy - but with his ego & the media in his pocket, he believes he can get away with it. Thanks to Stilton for calling him - again and again....

At least (this time, in this picture) Barry Soetoro has his hands in his OWN POCKETS.

From Neil Armstrong's family: the next time you walk out on a clear night and see the moon smiling, think of Neil and give him a wink.

So you see, President Obama was honoring the family's wish as requested. The rest of you critical of this are idiots, and should STFU

Except that the picture was taken in April, Robb.

I hear that this is actually a stock photo -- that's a Chevy Volt just beyond -- this wasn't even a purpose-taken photo. Anyone else confirm?

Hey, chicken - shht anonymous, don't you have a check to pick up from the Kos?

My God, you are all such dumbshit idiots.

Hey geniuses, that's not a moon and star, that's a moon and PLANET. Sorry your education suffered because you were too frightened to leave your basements.

Comrade Hussein is captivated by the Islamic Crescent in the sky.

Putting himself into everything and anything is exactly what Hitler and Stalin did and what the dictator(s) in North Korea are still doing. Standard doctrine for the people that want a totalitarian government and the people under their boot.

I weep for the future of this country because of articles like this.

Sounds like a lot of people here need to go back on their meds.

Wow, I don't think Obama's that great of a President, but...

2.) Calling a lie a lie, is not equal to cheerleading or worship. It's just calling out B.S.

3.) You're all idiots. Honestly, my voting record is about 50-50, but after the nastiness of the last five years, I won't vote Republican for a long ol' while. When y'all make even the most radical Democrats look like sane, responsible people, that should be your sign.

By the way, the White House Twitter handle is @whitehouse, not @barackobama

Yes this picture is clear evidence that Obama is a secret Satanist Stalinist Atheist Muslim Hitler-Marx who will take your guns and your bibles and then force you to gay marry as is clearly dictated by Sharia Law. Because of this the glorious American Race will die out and finally the U.N's Agenda 21 will be fulfilled.

it's all so clear to me now.

Subliminal messages in that picture! Vanity is thy name, Obama....to coin a phrase. And someone is right, the EARS have it!

What a poser.
Get the heck out of here and let us respect the honorable Armstrong.

"BTW is that a VOLT in the background?"

Nope. Too big, not on fire.

All the hate that is thrown at the president is unnecessary and really cheapens those who criticize him. Disagree with his policy as much as you need too, but, try civility when describing the person instead of acting like a den of internet trolls.

“For those who may ask what they can do to honor Neil, we have a simple request. Honor his example of service, accomplishment and modesty, and the next time you walk outside on a clear night and see the moon smiling down at you, think of Neil Armstrong and give him a wink.”

You have decoded the message perfectly! Congrats, you win 57 Chevy Volts, one for each state!

You're all insane. See, THIS is why I think Republicans are insane. Yes, let's waste our time focusing on a damn picture. Lordy lordy, there must be secret messages in this photo. Oh, he's looking at the crescent moon? Dear me, he must be telepathically communicating with all the evil monstrous Muslims in the world, who will help him take over America andf force you all to become slaves and become gay and eat your babies.

He's looking. at. the moon. Look at his stance. He's standing respectfully, as if contemplating the awesomeness of the universe and in awe of the great feat Neil Armstrong committed.

After seeing some of these comments, I no longer want to live on this earth. Humans are going backwards.