Let me say this right up front: Congratulations to Wolf Blitzer for being a relentless, responsible journalist. If you value the truth, this interview is a pleasure to watch. If you have even an ounce of human compassion for the in-over-her-head target of Blitzer's inquisition, it's positively brutal... 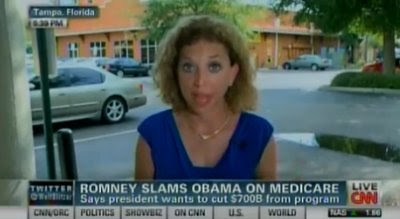 She stubbornly rejects the (correct) premise that the Romney/Ryan Medicare reform plan exempts everyone over the age of 54, and plays fast and loose with numbers -- conflating 55 and 65 on several occasions. When she is brow-beaten into finally acknowledging -- if not admitting -- the truth around the 3:45 mark, she quickly realizes her "mistake" and reverts back into denialism...

When Blitzer asks her to specify exactly how current or soon-to-be seniors would be impacted by the GOP plan, she cannot. Because they're not. 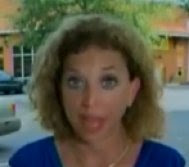 The Left is intellectually bankrupt on the very subject they claim will allow them to crush Mitt Romney in November. They despise the bipartisan solution Republicans have offered, but they have no alternative of their own.

Dear Democrats, Medicare is slated to go bankrupt in 2024. You say it's wrong for future seniors to be denied Medicare as it currently exists. Okay, what's your plan, guys?

We know that your actions have already cut Medicare by $700 Billion to pay for part of Obamacare. We also know that Obamacare establishes a government panel to ration care for the elderly. And yet the 2024 deadline is still coming. Again, what's your plan, Democrats? Mr. President? Anyone? I confronted Wasserman Schutlz on this very question last summer, and she gave an incoherent and inaccurate response.

...A debt crisis is on the near horizon. Entitlement programs are going under. Twenty-three million Americans are unemployed, underemployed or have given up home. GDP growth is slowing. The president and his allies have no plans, so they're forced to invent smears and argue against positions that their opponents don't hold.

That's why the Democrats' new mantra is "Forward", Guy. Looking back at their track record ain't exactly pretty.

Wasserherschitz returns me to memories of the windup toys I had as a kid sixty years ago. She like a windup is capable only of saying only what has been installed mechanically by her minders.
Blabber mouth Wasserschitz has been humiliated by numerous reporters in the last couple of months but yet she nor her DNC scripters installed by George Soros the old nazi kapo seem to realize she and they are buffoons and tools.