Obama’s “you didn’t build that” remark continues to haunt him politically. 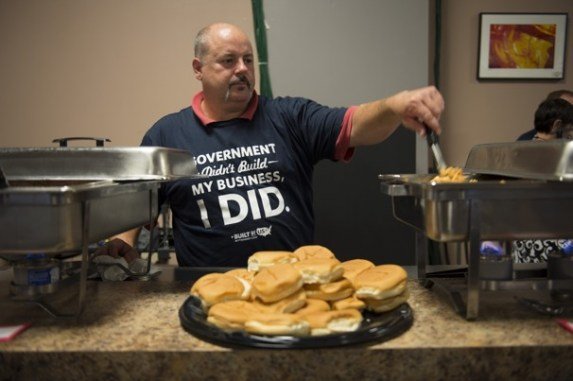 Photo credit: Nikki Kahn of the Washington Post
For proof, look no further than here…:

And so the co-owner of the Village Corner Deli here agreed to cater Obama’s visit Wednesday — but not before donning a t-shirt blaring the message: “Government didn’t build my business. I did."

It was a reference to a remark Obama made several weeks ago that his Republican opponent, Mitt Romney, has seized upon to portray Obama as anti-business...

Typical Washington Post spin at the end there. Mitt Romney has not portrayed Obama as anti-business.

OBAMA has portrayed Obama as anti-business. One could easily make the argument that Obama’s entire political philosophy and career is anti-business. He views success in business and the system of capitalism with total contempt.

I challenge any member of the so-called professional media or political class to name one thing Obama has done to help small business owners and entrepreneurs since taking office.

Don't hold your breath, Glob. Unless, that is, you're being driven around Martha's Vineyard by a Kennedy.

There's an idiot on Twitter and at my place running around telling everyone to boycott Mr. Murty (I've deleted those ridiculous and slanderous remarks). Murty and McMurray are really getting to the Democrats.

Maybe we'll see much more of this.

And btw Doug, thank you!