The actual level of support for the Divider-in-Chief is best reflected by his choice of speaking venues and the size of the crowds he's able to attract. As for the former, it appears the only places President Obama is welcomed with open arms are high schools and community colleges, both beneficiaries of wild amounts of stimulus spending (read: public sector union and other payoffs).

The the latter case, the claim is that sparse attendance of Obama speaking engagements is the result of "intentionally limiting crowd size". 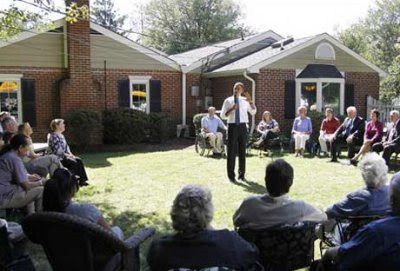 “We have plenty of time for big rallies,” a campaign spokeswoman, Jen Psaki, said between the rallies on Thursday. “Our focus right now is on exciting our supporters and winning over undecided voters and the smaller and medium-size events are the best venue to accomplish that because the president can closely engage with the crowd.

”Big rallies are expensive, especially given the logistical and security challenges for a president as opposed to a mere United States senator. And Obama campaign operatives, both at the Chicago headquarters and in swing states where Mr. Obama recently has stumped, say the campaign intentionally limits crowds by restricting tickets. The reason is to allow the president to better connect with supporters, aides say.

Typical reactions include this from Jammie Wearing Fool: "To better connect with people, by telling them they didn’t build that, or that they’re racist. Easier with a tiny crowd, we suppose. Four years ago a football stadium could hardly contain the awesome crows, Greek columns and his massive ego. Now he’s discovered frugality and intimacy." 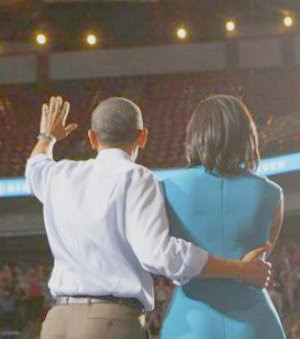 Ace of Spades calls it the Spinal-Tapization of the Obama Campaign: "I fully expect @davidaxelrod to tweet tomorrow that Obama isn't shedding voters, the President's appeal "is simply becoming more selective." ... I will give Obama 2012 credit for one thing tho: small crowds or not, they are funnier than Saturday Night Live."

Da Tech Guy notes that even The New York Times has expressed a bit of dismay at lackluster attendance, with one reporter tweeting: "Just to clarify, tix *started* at $51. Obama campaign sez event was sold out, but room is about half full. Hmmm."

And Battleground Watch snorts, "Oh really? You could have big crowds if you want them but they cost so much you don’t want them? Right. And I could date Kate Upton but then I would have to deal with all those guys ogling her and that would get annoying."

Using Touré logic, it's probable that the president's ex-supporters -- those who have abandoned ship after suffering through the worst "recovery" in history -- are now officially racists.

at 11:28 AM
Email ThisBlogThis!Share to TwitterShare to FacebookShare to Pinterest
Labels: Democrats, Economy, Obama

I wonder if Team Obama will give out Carolina Panthers blue shirts for his coronation at the DNC, that way they can proclaim that since everyone was wearing the same color as the seats, it was hard to get an accurate count.

Obama has become the political version of Sammy Hagar.