For obvious reasons. After all, who could possibly believe the same set of talking points -- repeated ad nauseum for six years straight -- recited in a nasally, obnoxious Yenta voice, which sounds like a muppet on 'ludes? 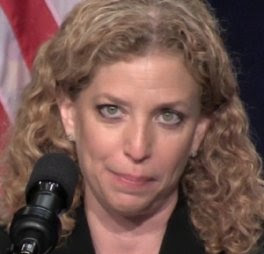 During the last day of the RNC convention in Tampa, Florida, Democratic National Committee Chairwoman Debbie Wasserman Schultz surprised Republicans by taking a stroll down radio road, in hopes of disseminating more of President Obama’s re-election message. In between radio spots, Wasserman Schultz effectively dodged the question as to whether she was going to debate her Republican congressional opponent Karen Harrington.

‘DWS’ as she is referred to, refused to answer any questions from ‘Republican-leaning’ media outlets.

Wasserman Schultz was asked several times if she was going to accept Harrington’s challenge, but she ignored the the reporter’s question. The Congresswoman was challenged to five debates by Harrington but has yet to agree to any of them- instead she called out Karen Harrington, GOP VP nominnee Ryan and GOP Presidential nominee Mitt Romney as “Republican Extremists’ in a fundraising letter to her supporters.

Of course, the real extremists are the left-wing kooks who still push for more "Great Society"/Section 8/Democrat Plantation policies despite 50 consecutive years of failure.

Support Karen Harrington for Congress. We don't need any more losers like DWS in Congress. Because we've reached the loser breaking-point.

Seriously, if the people in that district re-elected poodle-head, then the truly deserve to be governed by her.